"Insanity is doing the same thing over and over again and expecting different results." 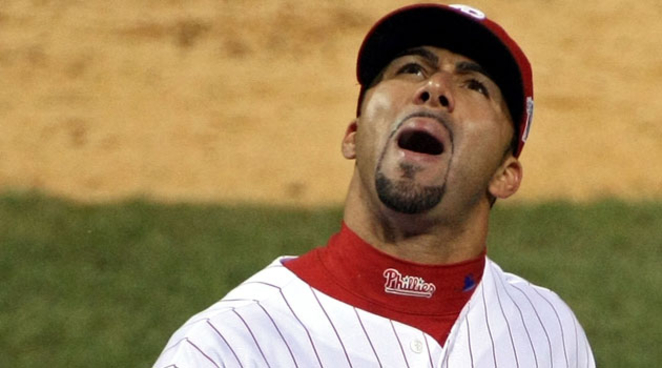 Every day, I try to find time for a long walk. I just grab my iPod, make sure it's not in shuffle mode (albums are meant to be consumed in their entirety), and head out. I let my mind wander, and allow my thoughts to propel me through the streets. I think about how I should invest my next million. I ponder how to re-cast recent films. I work out the plotlines for the sitcom that takes place only in my noggin.

Mostly, though, I think about the Phillies. I consider what personnel moves should be on their radar. I wonder if Charlie Manuel will ever stop batting Jimmy Rollins leadoff. I contemplate bullpen management, and bench usage, and the minor leagues, and… stumble on the same crack in the sidewalk almost every day.

It's just a momentary stumble, and there aren't really any repercussions to this particular act of doofusness. Sometimes, I'll elicit a concerned glance (or a derisive comment) from a fellow pedestrian. Typically, though, my lack of grace goes unnoticed. I'm not really sure why I stumble on that same crack so frequently. I'm well-aware of it's existence. I have the requisite level of agility to avoid a six-inch long obstacle on the ground, at least when given advance notice. I guess I just get lost in my train of thought most days, but there's really no good reason for making the same mistake so frequently.

In the offseason, when the Phillies declined reliever J.C. Romero's $4.5MM option, and retained him for $1.35MM, it looked like a good move. The signing was discussed on this here blog, and Romero appeared poised to be a useful member of the 2011 bullpen. The key to a successful season for Romero would be his usage. Against right-handed batters, Romero has struggled, posting a career split of .268/.382/.809 (K/BB of 1.07). However, against left-handed batters, Romero has been very effective, posting a career split of .215/.312/.290 (K/BB of 2.12). Even in the (highly unlikely) event that Charlie Manuel hasn't been reading this blog, it is fairly obvious that Romero is best-utilized as a LOOGY (left-handed, one-out guy).

As per usual, Romero has been superb against left-handed batters in 2011. Despite a somewhat-unfriendly BABIP of .313, Romero held lefties to a .208/.321/.208 slash line, which he coupled with a K/BB of 2.00. (By way of comparison, ace Roy Halladay's line against same-handed batters (righties, in his case) is .201/.228/.279.) Yesterday, Romero was designated for assignment, and is unlikely to play for the Phillies again.

There were game situations (typically, low leverage ones) where using Romero against right-handed batters was defensible. Occasionally, the availability of other relief options affected Manuel's deployment of Romero. However, the majority of the time, Manuel was able to use Romero optimally. Yet, he didn't.

I'm not really sure why Manuel used Romero the way he did. Heading into each game, Manuel was well-aware that Romero struggled against right-handed batters. Manuel is sufficiently agile, tactically, to keep Romero away from opposite-handed hitters. Maybe, as individual games progressed, Manuel simply became lost in his own strategic train of thought?

Unfortunately, Manuel's "crack in the sidewalk" has had, and could continue to have, repercussions. The Phillies currently have the best record in baseball, but correct use of Romero could have made that record even better. Additionally, Romero is available to be picked up by another contender, and would likely be particularly effective against the Phillies' lefty-heavy lineup. Romero could prove to be very damaging to the Phillies' postseason hopes, if he joins a team with a manager who, unlike Manuel, uses Romero optimally.