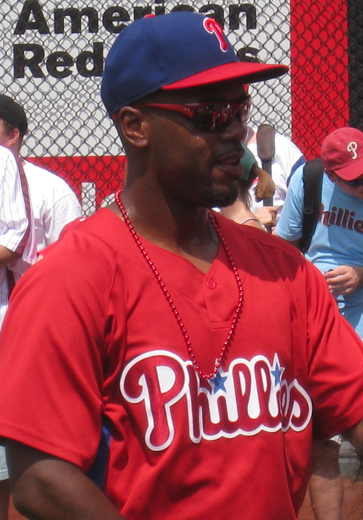 According to Todd Zolecki's blog "The Zo Zone," Jimmy Rollins could land on the DL due to the foul ball off of his right knee on Saturday night at PNC Park.

An MRI taken today showed a "pretty significant bone bruise" in the words of Ruben Amaro Jr., which has resulted in some swelling and inflammation.

A DL stint could result in the return of utility man, and more importantly second baseman, Pete Orr. With Rollins unable to go, Valdez is playing shortstop in his absence, forcing Utley into the lineup for a fifth consecutive game. Utley will need a game off soon, and Charlie would likely prefer to keep Martinez out of the starting lineup to do so.

The healthy, spring-training envisioned line-up that played Friday night in Pittsburgh only lasted one game. The Phillies hope Rollins avoids the DL and shows significant improvement in the next day or two, allowing the Phils' ideal lineup to take the field again later this week.

Update: In a recent tweet from Todd Zolecki, J-Roll added that he shouldn't be added to the disabled list.