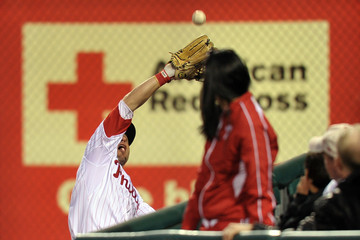 Ross Gload is hurting.   In today's Phillies Zone blog post by the Inquirer's Matt Gelb, he lays it out:

This much we know: Ross Gload does not think a stint on the disabled list will help his fraying hip. It's either season-ending surgery or play through the muscle tear.

This could prove to be a difficult decision for the Phillies to make because by the day, it's clearer Gload is limited. He pinch-hit Tuesday and reached on catcher's interference only to be removed for a pinch-runner… pitcher Kyle Kendrick.

So, either Gload gets surgery or plays through the pain.
First, I want to note how impressed I am with Gload's decision to play.  Gload is a free agent, and surgery could preclude him from signing with a team or earning a paycheck for the first several months of next year.
Second, there is no denying how valuable Gload has been to the Phillies.  Leading the league in pinch-hitting, something he did for all of 2009, Gload is one of the game's top pinch hitters.  (Side note: 2010's pinch-hit leader is currently playing at Lehigh Valley for the Iron Pigs).
But let's say the pain gets to be too much for Gload, or that the dimished power that Gelb notes has limited Gload to just singles begins to hur the team.   Maybe the Phillies should look to replace Gload's left-handed bat.
Gload has no real position, except maybe first base, but the bothersome hip has limited Gload to even running for himself, as Gelb notes.
So, if Gload reaches the point that he cannot continue, there may be a low-salary option out there available in a trade whom the fans would love and could help contribute to a World championship.
Jim Thome Could Be Available 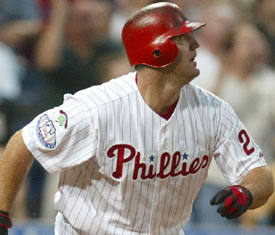 Courtesy Phillynews.com
"Now batting for Phillies pitcher Kyle Kendrick… Number 25…"
I can hear Dan Baker saying this come July 31.   What better professional left-handed hitter can be had other than Jim Thome?
Thome is not what he used to be, that is clear.   Thome is still a professional hitter and leader on a major league team, but in a bench or DH role.  But, the Minnesota Twins are buried in the A.L. Central basement and going nowhere fast.
Thome sits at 593 career home runs.  He would have June and July to try to inch those totals up towards 600 as a starter before the July 31st trade deadline.
And, if Thome had a choice, would he prefer 600 home runs or a championship before he retires?
Maybe he could do both.
Playing the role of pinch-hitter after the deadline is not new to Thome.  He did this in 2009 with the Los Angeles Dodgers.  The month of August after the trade, Thome hit six home runs and drove in 13 runs – all as a pinch hitter.
What barriers could there be?
Cost – not a factor.  Thome has a one-year deal for $1.5 million.   By July, the Phillies would have to pay very little for his services
Cost in trade – also not so significant.   For a .250 hitter with a little pop, the trade demands should not be high.  Besides, the Twins may wish to give one the game's best all around human beings the chance to win a championship.   A fringe prospect could be enough.
Thome's Inability to Play Defense – also not a factor.  Gload hardly plays a position anyway.  With versatile players on the roster such as John Mayberry Jr. and Wilson Valdez, the importance of having the 25th man play a position are easily negated.
Besides, rosters expand to 40 in September, leaving plenty of room for a Delwyn Young and Pete Orr.  Postseason rosters feature fewer pitchers, which leaves room to keep Pete Orr around and maybe even include a less-than-100% Ross Gload as well.
No matter what, I hope Thome gets a chance to compete for a championship.  He deserves it.  If not a return to the Phillies, perhaps the Cleveland Indians could take him back and he could end it where he started.
Topics
Writer: Frank Klose