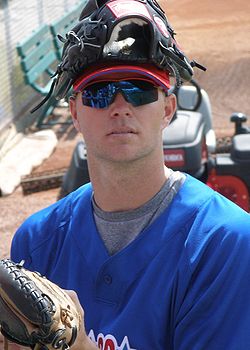 "It would be a dream come true. It would probably beat going to the World Series, to be honest with you."

The Closer Mentality-possessing reliever is known for his jocular personality. This particular statement is pretty much too insane to be taken seriously. Additionally, recent studies indicate that, in approximately 74% of the instances in which it is used, the phrase "to be honest with you" follows (or precedes) a falsehood. All signs seem to indicate that Madson is joking here.

The signs, however, are wrong. Utilizing the myriad financial resources of the blog, particularly the clout afforded by many generous Tip Jar donations, we have been able to determine the truth. Our vast network of information-gatherers has managed to acquire the following list, which was briefly removed from Ryan Madson's locker at CBP. We are pleased to present it to you, in reverse order, for purposes of suspense:

10. Get past Soda Popinski in Punch-Out.

9. Punch every individual who claimed that I did not have a "closer's mentality" in the face, with my left hand.

8. Create my own signature sushi roll.

7. Play in the World Series.

6. Find a major network to buy my comedy pilot.

5. Perform "On the Rise" on the field at CBP, with Neil Patrick Harris.

It is currently unclear how many of these dreams have already become accomplishments. It is likely, however, that achieving #2 may be beyond even Madson's capabilities.