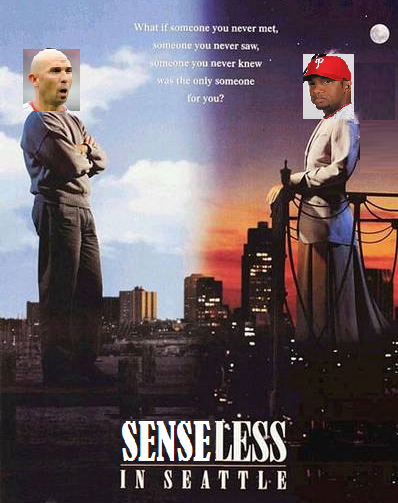 Typically, when a National League team plays in an American League ballpark, they have an inherent disadvantage: the lack of an acceptable Designated Hitter. This season's Phillies' squad is no exception, as their weak bench doesn't offer much in the way of offense. Even more troubling than the weak bench, is Manager Charlie Manuel's tendency towards "innovative" lineup construction.

The best DH option seems pretty obvious; horrific-fielding Raul Ibanez at DH (with poor-fielding Ben Francisco in LF). Naturally, I figured that we'd see Ross Gload as the DH, despite the fact that he is unable to actually run the bases (or anything more strenous than gimping to first base, really.) In the current era, in which "ghostrunners" and "automatic runners" are not yet commonplace, Gload isn't a good fit for any regular season role, except that of "Disabled List Denizen (DLD)." So, with trepidation, I checked out the Phils' lineup: 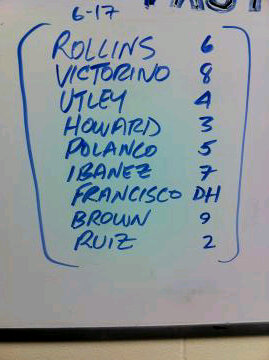 The lineup order actually looks fine. Swapping Jimmy Rollins to the fifth spot, and having Placido Polanco bat first would be an improvement, but there really is not anything to complain about. Well, until you notice that Raul Ibanez is playing left field, and Ben Francisco is the designated hitter. Francisco is an average fielder, at best, but Ibanez is one of the worst fielders in baseball. In spacious Safeco Field, Ibanez' lack of mobility could prove to be even more damaging than it is at smaller CBP.

I actually spoke to Charlie Manuel (in my mind, because he no longer takes my calls/responds to my texts)about the decision.

Frohwirth: "C.F., are you serious about playing Ibanez in LF, and Francisco DHing? You're just trolling us, right?

Manuel: "Well, Ibanez played in Seattle for many years, so I wanted to let him play in the field, in front of the Seattle fans.

Frohwirth: "So, basically, things like "outfield defense", or "winning the game", these aren't the priorities. Letting Ibanez play in the field against his former team is?

Manuel: "Well, Ibanez has played here before, so he has that advantage over Francisco."

Frohwirth: "And Francisco has the advantage where he has the physical capacity to actually move around in the field."

Manuel: "I'm not worried about you and your numbers, Frohwirth. The lineup is what it is."

Frohwirth: "OK. I guess it could be worse. At least Gload and Michael Martinez aren't playing."