Then and Now: Mark Eaton

Mark Eaton may not be remembered by Flyers' fans for leading the league in points or for being a physical defender, but that doesn't mean Eaton will be forgotten. Not only is he the lone Delaware-born player to ever play in the NHL, Eaton was also part of the highly despised 2009 Pittsburgh Penguins team that won a Stanley Cup beating the Flyers on the way. Starting out with the Philadelphia Phantoms in 1998-1999 up to the New York Islanders this past year, Eaton has played with seven different professional teams. What has Eaton done since his rookie season in Philly?

As an undrafted free agent, Eaton was signed by the Flyers in July of 1998. After a season with the Phantoms, Eaton played in 27 games for the Flyers during the 1999-2000 season. He may have had only one goal that season, but it was a game-winning goal against the Boston Bruins on April 8. Eaton also had an assist in his short regular season with the Flyers before the playoffs began. As the Flyers lost to the Devils in 7 games during the Eastern Conference Finals, Eaton experienced 7 games with the club going pointless and penalty free the entire span.

Just before the 2000-2001 season began, Eaton was traded to join Kimmo Timonen and Scott Hartnell with the Nashville Predators for a 3rd round pick, with which the Flyers picked Patrick Sharp in the 2001 NHL Entry Draft. 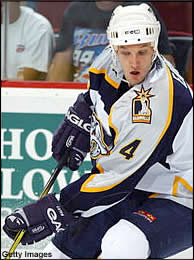 "I think it'll be a blessing to get away from local pressure," Eaton told Les Bowen at the Daily News. "The friends and family watching me and being able to read everything about me. It'll be good to put that part behind me".

Splitting his time evenly between the Preds and their minor league affiliate, the Milwaukee Admirals (a team boasting Randy Robitaille and Rory Fitzpatrick), Eaton played 34 games for both clubs and scored 3 goals for each as well.

The following season Eaton played in slightly fewer games for the Predators during a season where Scottie Upshall was making his NHL debut with the club. In 50 games, Eaton had two goals and seven assists. Also playing with the Admirals for the first time since 2000-2001, Eaton had a goal in 3 games for Milwaukee. 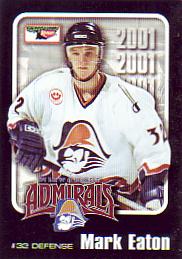 The 2003-2004 season was a big step for Eaton's career. Not only was it the season in which he had played the most games (75), but it was the first time Eaton played in the NHL playoffs since his rookie season. Unfortunately for the Predators, the top-seeded Detroit Red Wings won the series in six games. Unfortunately for Eaton, he had gone pointless in the playoffs yet again. 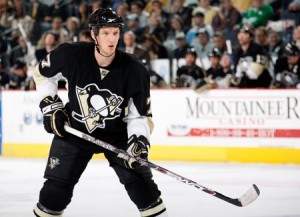 After the lockout, Eaton returned to the Predators as they added superstar Paul Kariya as well as former Flyers Mike Sillinger and Danny Markov. Playing in 69 games for Nashville, Eaton's numbers dropped, most notably his plus/minus by 18 (+16 in 2003-2004 to -2 in 2005-2006). Despite his play dropping slightly, the Predators advanced to the playoffs for a second straight year to face the San Jose Sharks in the Western Conference Quarterfinals. The Sharks won the series in five games as Eaton went pointless during the series.

Eaton left the Predators for the Pittsburgh Penguins during the summer of 2006 via free agency. Joining with Mark Recchi and John LeClair, Eaton played in only 35 games due to wrist and knee injuries, the fewest number of NHL games for Eaton in a season since 2000-2001. In his short season with Pittsburgh, Eaton failed to score a single goal, the first time he's gone scoreless for an entire season at any point in his career. Joining the Penguins for their first round five game loss to the Ottawa Senators, Eaton went pointless for those five games extending his streak to 23 NHL playoff games without a point.

The 2007-2008 season was more of the same for Eaton as he was limited to 36 goalless games for the Penguins due to a knee injury.

The Penguins, however, didn't seem greatly affected by the absence of Eaton. Falling two wins short of a Stanley Cup victory, the Penguins changed a few things for the 2008-2009 season. One of those changes was adding Mark Eaton to the playoff roster.

In a season that wasn't distracted with injuries, Eaton was capable of playing in 68 games for Pittsburgh. He'd score four goals, the most in a season since 2003-2004, and have five assists before the Penguins took on the Flyers in the first round of the 2009 playoffs.

Thanks to the Flyers' inability to win/lose in overtime on the last day of the regular season, the Penguins were handed the fourth seed in the East along with home ice advantage in the opening round. Eaton did his part in the series scoring two goals as the Pens won in six games. After scoring a goal in the first game of the series, Eaton scored the second goal in the Penguins' Game 6 rally that saw an 0-3 deficit become a 5-3 win as they eliminated Philly from the playoffs.

Next in line for Pittsburgh was the Washington Capitals. As the Pens won the series in seven, Eaton had two goals in the series, one of which was a game-tying goal in Game 1. Eaton's only assist in the series was the primary assist on Kris Letang's overtime game-winner in Game 3.

Moving on to the Carolina Hurricanes in the Eastern Conference Finals, Eaton was finished scoring goals for the playoffs, but that didn't mean he wouldn't help his team. He'd have an assist in Game 2 of the ECF and an assist in Game 4 of the Stanley Cup Finals against the Red Wings as the Penguins went on to win the Stanley Cup. In their 24-game Cup run, Eaton played every game scoring four goals and registering three assists. 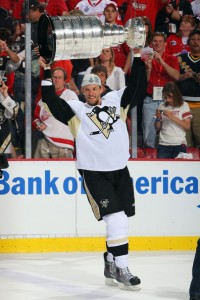 "When you're a kid, whatever sport you're pursuing, it's your dream to get to the top and win a championship," Eaton told the Beaver County Times. "Outside of family, this is the best thing that could ever happen to a pro athlete."

The following season would be Eaton's last in Pittsburgh as he played in 79 games for the Penguins. During this season Eaton had three goals and 13 assists, the most assists he's had during any season in the NHL. Eaton didn't score any goals in the playoffs, but he did have three assists in 13 games as the Pens fell to the Canadiens in a seven-game Eastern Conference Semifinals series.

Ending his four year stint with Pittsburgh, Eaton left to play for the New York Islanders this past season. Long Island is an area Eaton former played hockey in as he was part of the Apple Core Junior B's for two seasons, a team that plays on Long Beach. 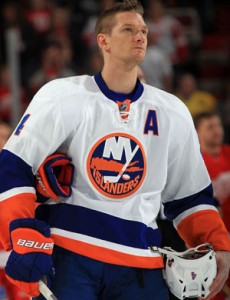 As the Islanders extended their postseason drought to four seasons, Eaton played in 34 games before a hip injury made him miss the second half of the season. In those 34 games, Eaton had three assists.

His time in Philly was short, but Eaton should be remembered not only for where he's from, but for what he's accomplished in his career.