Then and Now: Patrick Thoresen 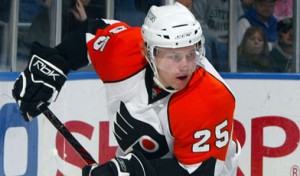 A player who will most likely be remembered for an infamous injury in the playoffs, Patrick Thoresen was a respectable 4th liner for the Flyers during the latter part of the 2007-2008 NHL season.

In his 35 games in a Flyers' uniform, Thoresen didn't register a single goal, but did post seven assists (two in the postseason). However, the success of Thoresen's game was measured more in defense and sweat rather than goals and assists. Since leaving the Flyers in the 2008 offseason, Thoresen has found his scoring touch in route to a Gagarin Cup.

Picked up off waivers from the Edmonton Oilers on February 22, 2008, Thoresen found his spot on the checking line with Jim Dowd and Sami Kapanen in Philly. The line, like most other checking lines, wasn't counted on for offense, but did an excellent job of shutting down other teams' top lines. Playing in 21 regular season games before the playoffs, Thoresen notched five assists before gearing up for his first taste of the NHL postseason. Unfortunately, his first game in the playoffs didn't end well.
Thanks to Jefflered

With the Flyers holding on to a 4-3 lead in the 3rd period of Game 1 of the Eastern Conference Quarterfinals in Washington, Danny Briere was sent to the box for high-sticking giving the Capitals a power play. Out on the penalty kill, Thoresen dropped down to block a Mike Green slap shot from the point. Thoresen blocked the shot, but the puck struck where no man should be hit with a 90 mph slapper.

Rolling on the ice in pain, the Capitals were essentially handed a two-man advantage scoring seconds after Thoresen's injury. Alex Ovechkin scored the game-winner later in the period to give the Caps a 1-0 lead in the series.

The original fear for Thoresen was that he had ruptured his testicle which would result in a possible surgery to remove it. Luckily for Thoresen, the injury wasn't this serious and he was back in the lineup for Game 3 of the series against the Caps. In fact, Thoresen got his revenge against Green and Washington by registering one of his two postseason assists on Kapanen's goal in the Flyers' 3-2 Game 7 overtime win.

As the Flyers fell to the Penguins in the Eastern Conference Finals later in the 2008 postseason, Thoresen left to play in Europe after receiving a low contract offer.

Playing for Lugano, a club in the Swiss-A hockey league, Thoresen found the scoring touch that had eluded him in the City of Brotherly Love. Averaging more than a point per game, Thoresen tallied 22 goals and 41 assists in 48 games in the regular season for Lugano. Despite posting seven assists in the 2009 playoffs, Thoresen only found the back of the net once for Lugano as they made a first-round exit. 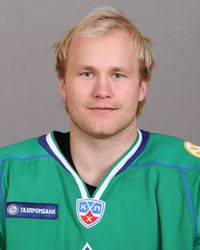 Playing in 56 games for Ufa Salavat Yulayev, Thoresen posted 24 goals, the most he's scored in his professional career and the most he's scored since his QMJHL years. With the addition of 33 assists, Thoresen ranked 6th in the KHL with 57 regular season points (two ahead of Marcel Hossa) and 1st in the league with a plus/minus of +45.

During the 2009-2010 KHL regular season, Thoresen played alongside another former Flyer Ole-Kristian Tollefsen and future New York Ranger Mats Zuccarello. Norway didn't make it out of the round-robin portion of the tournament, but Thoresen still made his mark with five assists in four games. Thoresen was a key piece to Salavat's championship run in the 2010 postseason, a run that was two wins short of a finals appearance. With the exception of former Nashville Predator Radulov, Thoresen was the team's point leader in the playoffs. In the opening round Salavat beat Yekaterinburg Avtomobilist 3-1 in a best of 5 series. Thoresen had a goal and two assists in Salavat's dominating 8-1 series clinching win.

After Yekaterinburg Avtomobilist, Salavat moved on to beat Nizhnekamsk Neftekhimik in 6 games before facing Kazan AK Bars in the third round. Despite four assists from Thoresen within the series, Salavat fell in 6 games. Thoresen's playoff totals were five goals and nine assists in 15 games (didn't dress one game).

Unsatisfied with the playoff finish, Thoresen came back in the 2010-2011 season setting personal records at the professional level in goals and points. Although he played in only 54 games in 2010-2011 compared to his 56 in 2009-2010, Thoresen scored 29 goals and had 37 assists for 66 points. Considering Thoresen was second in the league to only Radulov for the regular season, and when one considers the additions of Erik Ersberg, Oleg Saprykin, and Robert Nilsson, things looked promising for Salavat in the 2011 playoffs.

In the first round of the playoffs, Thoresen had six assists, including two two-assist games, as Salavat swept Novosibirsk Sibir 4-0 to face Kazan AK Bars.

Thoresen only had two assists in the series against Kazan, but one of them was the primary assist on Radulov's game winning goal in Salavat's 1-0 win in Game 5 to capture the series 4-1.

With eight assists in nine games, Thoresen braced for a series against Magnitogorsk Metallurg for a chance to win the Eastern Conference. Seven games later, Thoresen, who scored two goals and had five assists in the series, found himself with a chance to win his first professional championship as Salavat won the series 4-3.

To win the Gagarin Cup, Thoresen would need to beat the winner of the Western Conference in Moscow Region Atlant, a team providing former NHLers in Andrei Zyuzin, Jan Bulis, and Fedor Fedorov. Thoresen only had three points in the series, two of which were assists, but he arguably had the most important goal in the set.

Late in Game 3, Salavat found themselves in a game tied at two. Already winning the first two games in the series, the next goal determined whether Salavat experienced a 3-0 stranglehold on the series or they gave Atlant some life by allowing them into a 2-1 series. With only 7:15 left in the game, Kalinin provided a slap shot from the point that Thoresen tipped home for the game-winning goal and to put his team one win away from winning the Gagarin Cup.

Salavat dropped Game 4, but won the Gagarin Cup in Game 5 by a score of 3-2. Thoresen finished the playoffs with 3 goals and tied for first in the league with 15 assists. His 18 points definitely helped Salavat win the Cup and earn his first professional championship.

Throughout the playoffs, Thoresen kept a goalie stick upon which he affixed a hockey puck for each win Salavat experienced in the 2011 postseason.

"I got this stick prepared especially for today," Thoresen told Andrei Lopata of KHL.ru as he held the stick holding 15 pucks, "I was just missing one, the most important puck. And we've got it! We're Champions!"