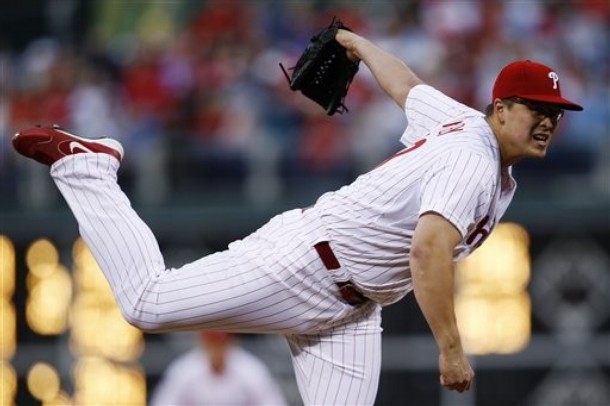 None of the Red Sox in tonight's lineup have faced Vance Worley before. Red Sox, meet the Vanimal. On top of that, Adrian Gonzalez starts in right field tonight for the first time since 2005. Some advice for the Phils' lineup: Hit it to Adrian.

Vance Worley was pitching one-run ball through seven innings, the only run allowed being Lackey's RBI double, which was his fifth career hit in the majors. That double tied the game; Ibanez had scored Shane from second on an RBI double in the second inning.

Those seven strong innings would be it for Worley. But, that's a career high for him in the majors. He allowed just one earned run on six hits, walking two and striking out five.

Raul Ibanez provided a solo home run to right field to give the Phillies a 2-1 lead in the bottom of the seventh, and went 3-3 on the night.

Michael Stutes pitched a beautiful 1-2-3 eighth inning, and young, filthy Antonio Bastardo came in for the save, retiring the side on three pop-ups. Phillies win, 2-1, and are 51-30 on the season, still holding the best record in baseball.

Cole Hamels vs. Jon Lester tomorrow afternoon @ 1:05 as the Phils go for the three-game sweep.