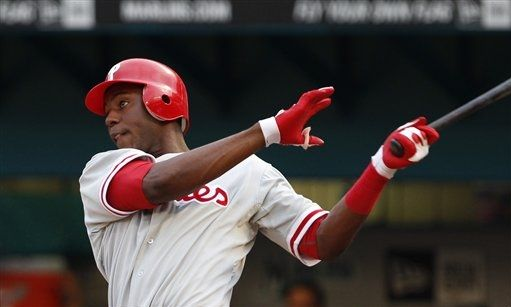 Judging by the way these two teams are playing (the Phillies are dominating and the Marlins are downright terrible) it's no wonder why the Phils swept them tonight.

With Victorino out due to a thumb sprain, John Mayberry Junior started in center field tonight. He gave the Phillies an early 2-0 lead in the bottom of the second, crushing a home run ball. The Marlins made the mistake (again) of intentionally walking Howard to get to Ibanez. Raul doubled over the head of Bryan Peterson and brought in two runs in the third inning.

The Marlins finally fought back and scored three in the third, two runs scoring on Gaby Sanchez's single, and Sanchez scoring on Hanley Ramirez's single.

Jimmy Rollins hit his eighth home run of the season in the fourth inning, and John Mayberry hit another home run in the sixth, giving the Phils a 6-3 lead.

In the tenth inning with Baez still in, Mike Stanton destroyed a baseball, sending it to the left field seats, winning the game 7-6 for the Marlins.

Off day tomorrow for the Phils, the Braves will head up to Citizens Bank Park for a three-game series before the All-Star break. Halladay vs. Beachy on Friday.