Cliff Lee, Cliff Lee, and a Loss in Extra Innings 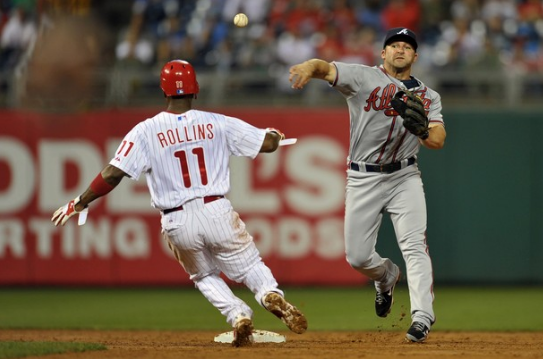 Courtesy of Daylife.com …Sorry, no pictures available from today's game just yet.

It's becoming quite habitual to start off a recap of a game started by Cliff Lee with: CLIFF LEE. Look at the title of this post. Everything under it does not need to be explained (except for the last part), just know that Cliff Lee was simply being his charismatic, dominant self this evening.

Here we are in the third inning, and Cliff Lee has already struck out three. But, he's up to bat against Tommy Hanson who is about to toss pitch number ten to Cliff. Please note (looking at you, Phillies lineup) that this was the longest at-bat of the game at that point, and Cliff Lee murders pitch number ten, sending it to the seats in right-center. It was his first career home run, and boy was it awesome. It also gave the Phillies a 1-0 lead.

Of course, Dan Uggla had to ruin everything and tie it up with a solo homer in the fifth.

The game would remain tied through the next three inning, the eighth being Cliff Lee's last. His line: One earned run, three hits, two walks, nine strikouts.

Young, incredibly filthy Antonio Bastardo struck out two in the ninth, lowering his earned run average even further to 0.82. Going into the tenth inning, and Juan Perez faces the 7th, 8th, and 9th hitters of the Braves' lineup again. He didn't strike out the side on nine pitches, but he struck out two and grounded out one on 14 pitches.

For once, Michael Stutes didn't strike out two in a relief appearance. Instead, he allowed a single which scored pinch-runner Ramirez from second, and a two-run home run to Brian McCann. Braves hopped on a 4-1 lead, and the Phillies could not come back in the bottom of the eleventh.

Hamels will take the mound against Derek Lowe for the last game of this series tomorrow.