Everybody Freak Out! Your Favorite Prospect Is Going to Be Traded! 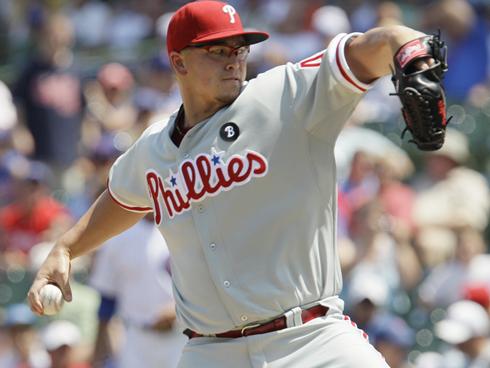 Well, it's that time of the year again.   Kevin Durso just wrote a nice piece called "The Bigger the Better: A Look at Possible Big-Name Trades" that takes a look at some of the big-name pieces that could be coming to Philadelphia.

However, Twitter is abuzz with paranoid fans who are afraid the Phillies will give up the next Mickey Mantle for the next Eric Bruntlett.

A couple points before we revisit some of the other deadline deals of years past.

1. There is no such thing as overpaying if you win the World Series.   In a deal which was not a deadline deal, the Phillies traded Michael Bourn for Brad Lidge.   Bourn has put together a decent career in Houston, making an all-star team, stealing a ton of bases, and serving as a solid leadoff hitter for the Astros.  I do not think there is anyone out there complaining about Bourn being traded right now.  If any of their players have the upside of Bourn, they should be lucky.

2. I still vividly remember Nick Leyva saying, "You gotta trade good guys to get good guys" after the Phillies had shipped Juan Samuel for Roger McDowell and Lenny Dykstra.  Yes, some of these prospects the Phillies have will turn out to be solid major league players.   But also keep in mind that some of them won't.   Philadelphia's favorite fifth outfielder John Mayberry Jr. was a first-round draft pick and once considered a can't-miss prospect.  The Texas Rangers soured on him and traded him for the Phillies' version of a first-round pick that never made it, Greg Golson.

3. Pitching and defense win, but you still need to score a run or two for your own team.  The Phillies lineup has been anemic, to say the least.   Yes, the Phillies have the best record in the National League, but a lot of those wins were racked up against scoring runs against mediocre pitching.  Because the Phillies can beat up on the Reds' fifth starter, does not mean that they will score runs in the playoffs against the top starters of San Francisco or Atlanta.  The Phillies' pitching will dominate, but they still need to score some runs in the playoffs for it to matter.

Now, here are the prospects the Phillies dealt since 2006:

August 19, 2006: Phillies trade Andrew Barb and Andy Baldwin for Jamie Moyer
Have you ever heard of either of these guys?  'Nuff said.

July 30, 2007: Phillies trade LHP Matt Maloney to the Cincinnati Reds for RHP Kyle Lohse
One Cincinnati Reds blog once listed Maloney as the Reds' #13 prospect.  Do you think anyone has been crying that Matt Maloney was traded and gone 4-7 for the Reds in 20 starts the last three years?  He was considered a decent prospect at AA Reading at the time of the trade.

July 18, 2008: Phillies trade IF Adrian Cardenas, RHP Josh Outman, and OF Matt Spencer to the Oakland Athetics for RHP Joe Blanton
Outman has been a serviceable starter, but never dominant.  The Phillies beat him up recently after he returned from surgery.  He is 8-6 in his three-year career.  Adrian Cardenas spent two years on the Baseball America top 100 prospects list, but he has never moved above AAA.  Matt Spencer?  He was shipped to the Cubs at one point, and is on their AA squad.

July 31, 2009: Phillies trade IF Jason Donald, RHP Jason Knapp, RHP Carlos Carrasco, and C Lou Marson to the Cleveland Indians for LHP Cliff Lee
This is an example of a trade that worked out for both teams.  But really, Donald has proven to be little more than a utility infielder.   Marson is a backup catcher.  Knapp has never played above class A, and suffered another major injury this season.   Carrasco, however, has found some success as a major league pitcher in 2011 and is 8-7 with a 4.25 ERA.   Now, we are just going to go and pretend Lee wasn't traded for Tyson Gillies, Phillippe Aumont, and J.C. Ramirez, and we will be just fine with the trade.

July 30, 2010: Phillies trade LHP J.A. Happ, OF Anthony Gose and IF Jonathan Villar to the Houston Astros for Roy Oswalt.
Oswalt is injured this year, with a 4-6 record thus far, but in 2010 was dominant, losing only his first start and going undefeated the rest of the way.  Oswalt even garnered some Cy Young votes for his 2010 effort.   Many voiced their disapproval after the trade for giving up J.A. Happ.  If you have not noticed, in 2011 Happ is 4-11 with a 5.88 ERA.  Were the Phillies counting on Happ as a starter this season, the Phillies would likely be shopping for a replacement right now.  The Astros traded Gose to the Blue Jays for Brett Wallace.  Gose is probably the best prospect traded in all of these deadline deals and a high ceiling remains for him, should all go well.   Villar probably will not remain a shortstop, and does not possess much of a bat, as he currently is hitting .209 in AA.  Gose is hitting .251 himself at class AA but has stolen 45 bases and gets on base at a .353 clip.