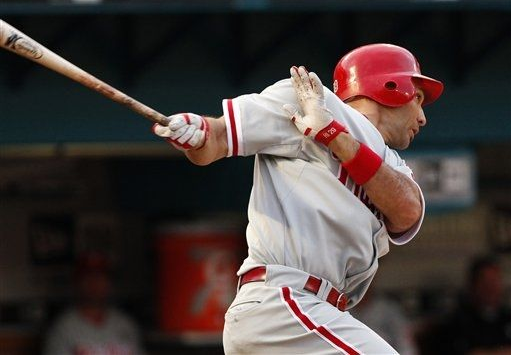 What a fun game this was. For Phillies fans that is, not Marlins fans (if there are any left). Cole Hamels, who came off of a short outing on June 30th due to a minor hand injury, pitched magnificently against Chris Volstad who exited early tonight in a horrible four-inning outing.

The Phillies' bats got to Volstad in the third inning tonight, scoring five runs to hop on an early lead. Raul Ibanez started it with a two-run single, which came after Ryan Howard was intentionally walked. Domonic Brown singled to score Howard, then Wilson Valdez singled to score two more runs.

Ryan Howard went yard (400+ feet) in the fourth inning to give the Phils a 7-0 lead. It was Howard's 18th of the season.  John Buck answered in the same inning with a two-run home run.

Howard delivered again in the sixth, sending Rollins home on an RBI single off of Jose Ceda. 8-2 Phillies.

In the ninth inning, Brown singled and Francisco doubled, followed by Jimmy Rollins' intentional walk. With the bases loaded, Michael Martinez tripled, sending everybody home, and giving the Phillies an 11-2 lead. Mini-Mart scored on Ryan Howard's double, which gave Ryan the National League lead in RBI. To top it off, Raul Ibanez launched a ball into the right field stands, giving the Phils a 14-2 lead.

Scott Mathieson loaded the bases in the ninth, but got Gaby Sanchez to pop-up with two outs to end the game.

Phillies tacked on 18 hits and 14 runs tonight. Rollins and Howard went 4-5, Ibanez and Howard both drove in four runs.

Likely series sweep tomorrow night with Kendrick on the mound.