Howard, Victorino Come Up Big in 7-6 Win Over BlueJays 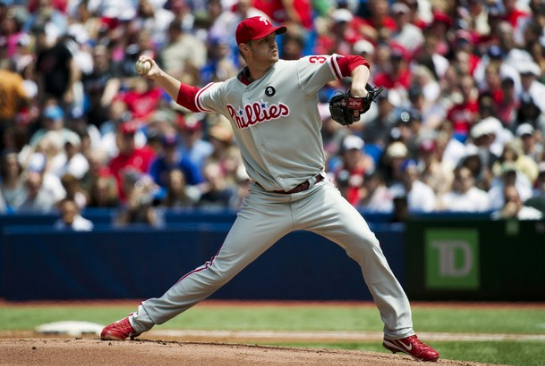 This post was appropriately titled "Damn it, Kendrick!" before a power surge from the Phillies' bats in the ninth inning lifted them to a 7-6 win over the BlueJays on Canada Day.

In the third inning, Shane Victorino singled to score Chase Utley which tied the ballgame at two a piece. However, the BlueJays hopped on a 4-2 lead in the fifth inning after Thames launched a two-run homer to right field.

Domonic Brown scored on Carlos Ruiz's single in the sixth inning, cutting the Jays' lead down to one run. However, it would be Shane Victorino who came up big in the seventh and tied the game on a stand-up, RBI triple to left field. Shane later scored on Ben Francisco's sacrifice fly which pushed the Phillies to a 5-4 lead.

With Frank Francisco in to close it out against the Phils, all did not go so swimmingly for Toronto. Ryan Howard singled to score Placido Polanco and Chase Utley giving the Phillies a 7-6 lead.

Young, filthy, apathetic Antonio Bastardo closed it out in a 1-2-3 fashion, without showing a single emotion. I don't even think his facial expression changed at all throughout the entire inning. I'll take it though, the Phillies won! Game two tomorrow afternoon, Roy Halladay takes the mound against his former team for the first time since signing with the Phillies in 2010.