Hunter Pence on the Phillies? Not Worth It

A special guest post by Domonic Pody. Or is it Dominic? 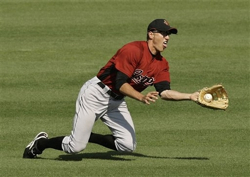 Let’s get a few things straight right off the bat: Hunter Pence is a good baseball player; having him on the roster would probably help the Phillies anemic (schizophrenic?) offense; and if a reasonable deal can be made for him, the Phillies should make it. But because by all appearances any deal for Pence won’t be reasonable, and because his much lauded offensive production is artificially inflated and unreliable, the Phillies should stop haggling for Pence.

Defense, meanwhile, is notoriously difficult to quantify, even for the sabermetricly-inclined among us. The best metric at this point is UZR, or Ultimate Zone Rating. It’s incredibly complicated, but FanGraphs gives a good summary: “the basic gist is that UZR puts a run value to defense, attempting to quantify how many runs a player saved or gave up through their fielding prowess (or lack thereof).” It’s counting statistic, much like hits or errors, so it’s generally divided by 150 for comparison purposes. Pence’s UZR/150 is 4.8, putting him somewhere between the 60th-70th percentile among ML fielders. Once again, a respectable, but not earth-shattering, number for Pence.

Bringing it all together, Pence has been worth 17.3 fWAR (Fangraphs version of Wins Above Replacement) to the Astros from his call-up in 2007 through today. This means he has been worth 17.3 wins above a replacement-level player, otherwise known as an average call-up from the minor leagues. 17.3 from 2007-2011 is a solid WAR: he is tied with B.J. Upton for 11th among ML outfielders in that statistic.

But between the lines, an alarming trend emerges, especially concerning Pence’s production this year: his BABIP. BABIP (batting average on balls in play), for the uninitiated, is a descriptive statistic whose usefulness far exceeds its relatively meek sounding name. At its best, BABIP tells us when a player has been “lucky” or “unlucky” while batting or pitching. And it sure seems like Hunter Pence has been lucky in 2011.

Pence’s .370 BABIP in 2011 is 73 points higher than the major league average BABIP in 2010, strongly suggesting that Pence has benefitted from batted ball luck. Moreover, while there is evidence that batters can control some aspects of hitting that influence BABIP, Pence does not seem to have that skill (or, at least, not to the extent that it explains his very high BABIP). In 2010 his BABIP was .304, only 7 points above league average; in 2009, it was .304. If Pence had the skill necessary to make more of his balls in play fall for hits than the average hitter, we would expect to see significantly above-average BABIP throughout his career. But since we don’t, it appears that Pence has simply been lucky this year—so don’t let his current numbers fool you.

But despite that, Pence is still an above average baseball player who could add depth and power to the struggling Phillies lineup. So why not get him? The Astros are simply asking too much. The Phillies have offered top prospects RHP Jarred Cosart (ranked 6th in the Phillies system by the blog linked, the excellent Phuture Phillies) and 1B Jonathan Singleton (ranked 9th). They apparently also offered Domonic Brown, though Buster Olney has now said that will not happen. Consider that a good thing—I was planning on writing another 500 words or so defending Brown before that news came down, so the Phillies pulling him back is quite a good thing in my estimation. But even without Brown, a deal for Pence at the current price is not a good thing in my eyes. Unless they can make a deal involving Vance Worley—whose stock will never be higher, as his 2.02 ERA is likely to regress—for Pence, any deal will be questionable. Two top-10 prospects weren’t enough for the Astros; any asking price higher than that is not one the Phillies should be meeting for a player of Pence’s caliber.

As mentioned above, given the right deal, Hunter Pence would be a valuable addition to the Phillies lineup. But the right deal doesn’t seem to be on the table. Personally, I understand Ed Wade’s reluctance to deal for anything but the best from Philadelphia. In his two deals with the Phils since becoming Houson’s GM, Wade has landed Michael Bourn, Geoff Geary, Mike Costanzo, J.A. Happ, Jonathan Villar, and Anthony Gose. The Phillies, meanwhile, got Brad Lidge and Roy Oswalt*. I think it’s obvious who “won” those trades.

So, in my eyes, a deal for Hunter Pence involving anything but less than the Astros current asking price is not a deal worth making. But for anyone hoping the Phillies pick up a right-handed bat, all is not lost. Remember when I said Pence was tied in fWAR with B.J. Upton since 2007? Well, it turns out Upton is on the trading block as well. Maybe Ruben will make that deal—and make all of us happy.

* And Eric Bruntlett, but I like to pretend that part never happened.

Dominic Pody (@burythemfast) is a rabid Phillies fan and stat junkie. His most prized possession is a ball autographed by Jason Michaels, Jose Mesa, Bruce Chen, and Omar Daal.