Eagles Flyers Phillies Sixers About Us Write For Us
Previous month:
June 2011
Next month:
August 2011

Poor Michael Stutes Left All Alone in the Bullpen; Team Leaves Him Behind 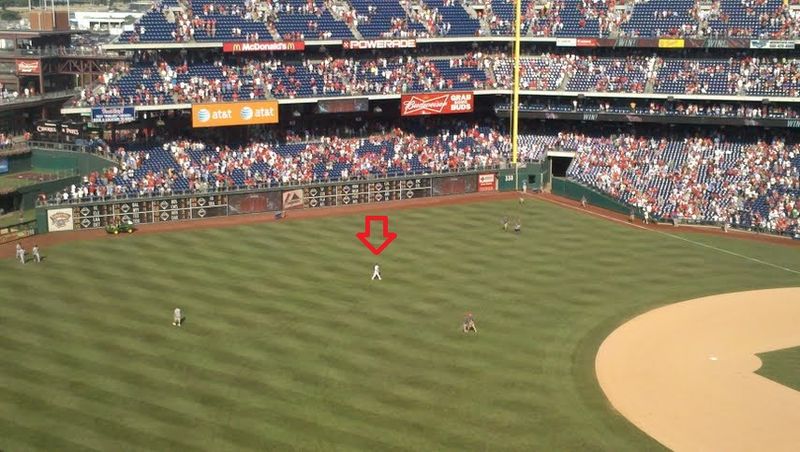 When the Phillies needed a roster spot for Placido Polanco, they opted to send down a reliever rather an a position player, since Roy Oswalt is due back in a week anyway, and that could buy the team time to make a tough decision.

However, the six-man bullpen got a lot of work today.

That left poor Michael Stutes all alone in the bullpen (which, could have become problematic if the game went a few more innings).

Even worse, being all the way in the bullpen, Stutes missed the walk-off celebration, and the entire team sans Stutes was already headed to the clubhouse by the time Stutes headed there himself.   Here he is walking all alone from the bullpen to the clubhouse as the grounds crew gets to work.

The Phillies have had several opportunities of late to complete the sweep on a series, and everytime they get it lately, it seems to go by the wayside. Today, it would take a little extra to prevent that from happening again. But, in the end, the Phillies did with plenty of support from Raul Ibanez.

It was the Phillies who took the early lead in the second, as Raul Ibanez belted a solo shot to center.

For quite some time, that would be the only offense to speak of. That was until the fifth, when a two-run single by Xavier Paul put the Pirates on top. The Phillies had a quick answer, as Jimmy Rollins brought home two with a single. But, the Pirates weren't done. With Worley likely finished after six innings, he was one strike away from escaping with the lead. Lyle Overbay had other ideas. He homered to deep right field to put the Pirates on top.

Vance Worley was finished after the sixth, allowing four runs on seven hits, with no walks and seven strikeouts. Brad Lidge came on for the seventh, and saw his early stretch of success end. He allowed an RBI double to Garrett Jones to extend the Pirates' lead.

The Phillies just wouldn't go quietly. Ryan Howard doubled in the eighth to bring the tying run to the plate, but made a mental error on the bases. He was out trying for third on a grounder to short by Hunter Pence, who would have easily reached even if Howard stayed put. Raul Ibanez made up for it with his second home run of the game, a two-run shot to tie it.

The Phillies nearly won it in the ninth, as Jimmy Rollins and Shane Victorino walked to reach. Rollins stole second, and then stole third as part of a double steal with Victorino. That left it up to Chase Utley, who battled in the whole at-bat, and eventually flied to deep center, forcing the game into extras.

In the tenth, the Phillies finished the job. Pence doubled with one out, and that brought Raul Ibanez to the plate. Ibanez had already done enough to be a hero, but he capped off an amazing day with a walk-off double, giving the Phillies the sweep and the 6-5 win over the Pirates.

The Phillies just somehow find a way to win. As Pence put so perfectly in a post-game interview, this team is a scrappy bunch, and it is simply awesome. The Phillies managed to turn around a rough few innings, and pull out a late victory. The hero of the day is obvious, as Raul Ibanez dominated at the plate, going 3-for-5 with two home runs and a walk-off double. Jimmy Rollins went 2-for-4 with a pair of RBIs as well.

On the mound, Vance Worley allowed the most runs he has all season since taking his loss to the Mets. This time, the Phillies were able to overcome the deficit, and get him off the hook. Overall, it wasn't a terrible day for Worley, but appeared to be enough that the Phillies would fall. But, it's that fighting spirit of the Phillies that powered them back into this one. And with Raul Ibanez leading the charge today, you just had a feeling that he would be right in the middle of it.

Finally, after all these chances to sweep of late, they completed one today. Now, with the homestand over, it's on the road for ten games.

The Phillies open a ten-game road trip tomorrow, as they start a three-game series with the Colorado Rockies. 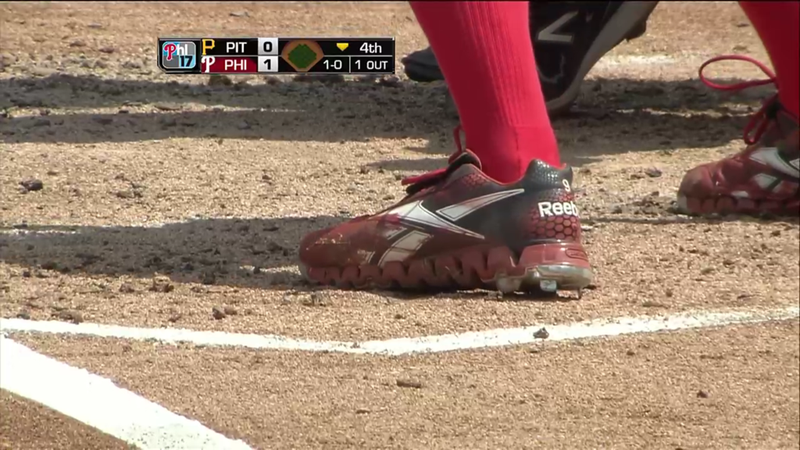 Sorry if the photo ended up broken earlier.

Thanks to @ohwtfmatt for the photo. 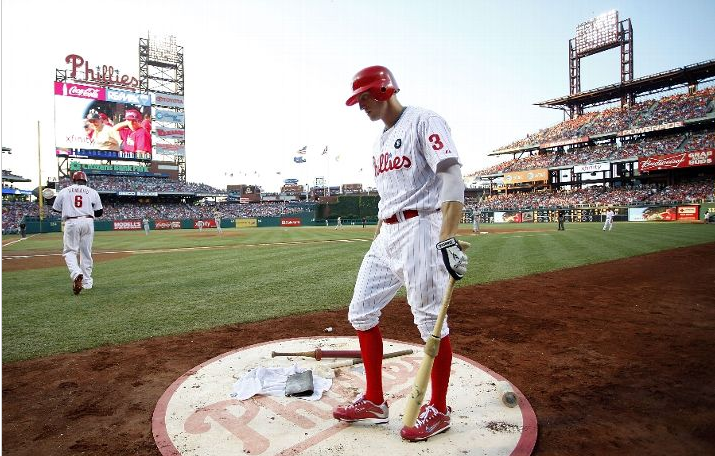 Hunter Pence and Placido Polanco were both in the lineup tonight, fielding their usual positions behind Cliff Lee. That alone should be enough to want to watch this game. An Ace, a brand new right-fielder fresh off the plane from visiting Milwaukee, and a returning veteran who is good as new after a back injury. Let's play ball.

We would have to wait until the second inning to see Hunter Pence step up to the plate for the first time. But, before he could do that, Ryan Howard sent a fastball to the ivy walls in center field for his 21st home run of the year. Hunter Pence grounded out in his first at bat, however, after doing so, Charlie Manuel argued with first base umpire Angel Hernandez that Pence was safe. Which he was.

In the bottom of the third, Jimmy Rollins homered to right field to make it a 2-0 game. Ryan Howard came up big in the same inning, doubling to left field scoring Victorino.

Pedro Alvarez homered in the fourth to score two and cut the Phillies' lead to one run.

The fourth inning was just as great as the third for Howard, who singled to score Rollins, collecting his 1,000th career hit. Congrats, big fella. That's also puts him at 80 RBI for him for the season. Chase Utley had singled beforehand, scoring Cliff Lee.

Carlos Ruiz doubled to score Polanco in the seventh inning, giving the Phillies a 6-2 lead.

In the top of the eighth, in Cliff Lee's final inning, Neil Walker singled to score Ciriano. Brandon Wood singled to score McCutchen, and that would be it for Lee. Young, filthy Antonio Bastardo ended the inning, striking out Alvarez. Lee's line from tonight: Four earned runs, eight hits, two walks, eleven strikeouts.

Ryan Howard was intentionally walked in the eighth to get to the new fifth man, Hunter Pence. Big mistake, Hunter singled to score Shane Victorino who had tripled to get on base. Hunter's first hit and first RBI as a Phillie is now out of the way.

With a 7-4 lead, Ryan Madson pitched a 1-2-3 inning, striking out the side. Phillies go on to win, taking the series from the Bucs. Game three tomorrow afternoon, Vance Worley against Jeff Karstens.

Jim Thome Hitting his 600th on the Phillies? Please? 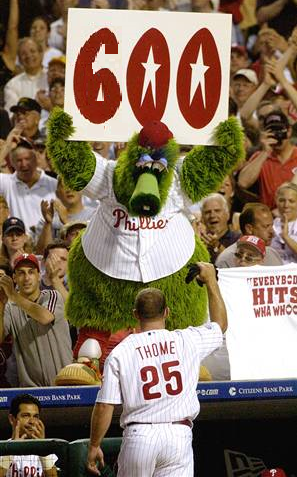 We had this piece back on June 1 calling for him.   Sounds like Minnesota isn't in the mood to deal, though they could use a roster spot soon when Span comes off the DL...

The Phillies really do need a player on the bench that can belt a home run that the opposing manager worries about in the late innings.

Jason Giambi would be good too.

Of course Philies fans want to run out and get a custom Hunter Pence jersey before tonight's game.  Heck, last year I went and got an Oswalt in time for his first game played.   But what number will Pence wear?

However, Yahoo Sports made a point of changing the number on Hunter Pence's player card, and it's not #3.  It's #5:

If John Kruk could trade #28 to Mitch Williams for a case of beer, maybe Pence can get his familiar #9 from Dom Brown.   Thanks to @jjbuttons for pointing this out.

Also - 97.5 the Fanatic just posted the podcast of their interview with Hunter Pence this morning.  Check it out here.

Hunter Pence Knew He Would be On the Phillies All Along 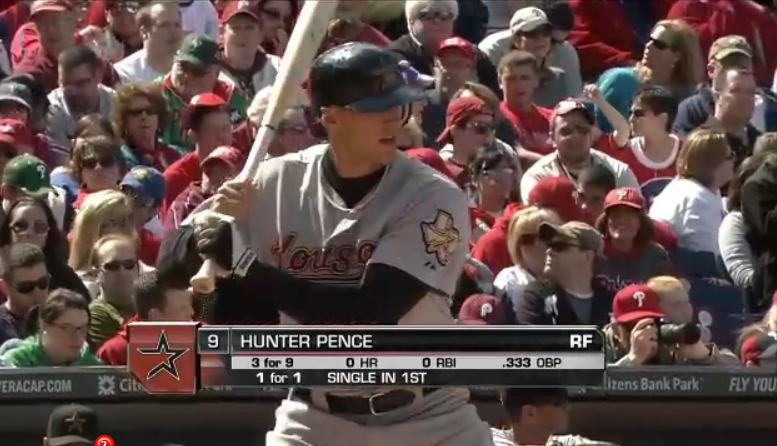 Well, at the All-Star game, new Phillies OF Hunter Pence asked Roy Halladay what it was like to be on the Philadelphia Phillies.  From Kevin Cooney at Phillyburbs.com:

Apparently, Pence had his eye on Philadelphia as well. Starting pitcher Roy Halladay said on Friday night that Pence and he had a brief conversation at the All-Star Game about possibly joining the Phillies.

"He asked about how I liked it here (in Philly)," Halladay said. "For me, it has been everything that I thought it would be. I think he's going to be excited to come here and play.

He must have known.  The All-Star victory caused excitement for Pence:

He must have known he was coming to Philadelphia.  Why else would a Houston Astro look forward to Home field?

By the way, the last two series the Phillies faced Pence in Philadelphia, Pence homered.  He should fit right in.

Additionally, someone registered the twitter handle @hunterpence3 in anticipation of Pence's assigned number 3: 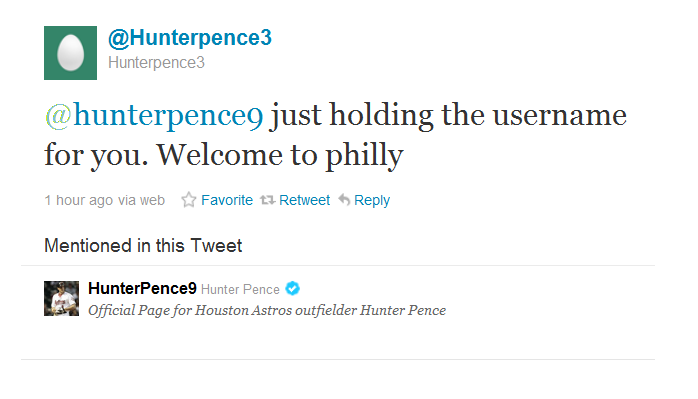 I still think Pence and Brown and the Phillies will work it out that Pence keeps #9 and Brown finally gets his preferred #3 when he returns from Lehigh Valley...

Hunter Pence Traded to Philly from Houston for Prospects

It's official, Hunter Pence is a Philadelphia Phillie. He was pulled from tonight's game in houston, and was seen in the dugout hugging teammates, tears in his eyes, as he took in the moment of playing for Houston for the last time.

Pence was traded for Class-A minor league prospects Jarred Cosart (P) whose stats can be found on that link from prior to the Futures Game, and first baseman Jonathan Singleton. Singleton has posted eyebrow-raising numbers this season with the Threshers. Josh Zeid, a pitcher with the Class-AA Reading Phillies is also part of the deal.

The final player to be named later will, well, be named later. Stay tuned, word is that the list of players are from low-class A.

Just in Case You Were Wondering

The Phillies won. There's your recap.

Phanavision is Pretty Racist: See Andrew McCutchen of the Pirates 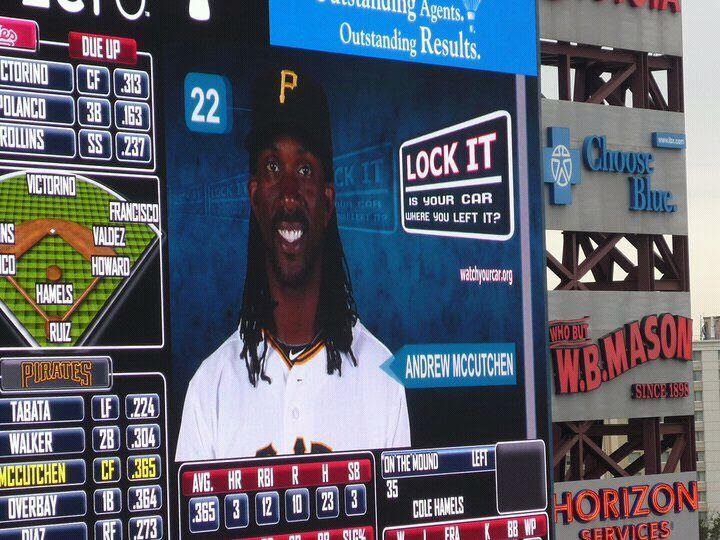 Seems racist to me!