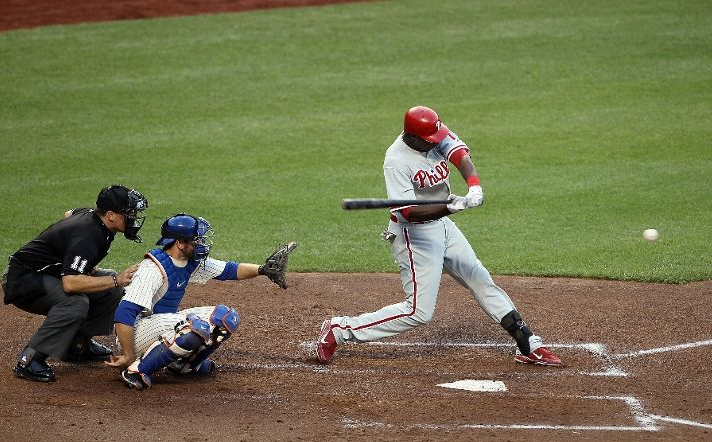 Finally, Phillies baseball! It has only been five days since their last game, but it seems like weeks. It's a good thing they won tonight, huh? Sorry, spoiler alert…

John Mayberry drove in the first two runs with a double in the second inning, followed by an RBI groundout for Vance Worley, his first career RBI.

In the bottom of the fifth, Raul Ibanez redeemed every ball that he has misplayed by making a fantastic sliding grab. One inning later and Raul went yard for his 13th homer of the season. 4-0 Phils.

Vance Worley did not allow a run to score tonight in his outing. He walked four and struck out four, allowing three hits. An earned run was charged on him after leaving in the sixth, Juan Perez tossed a wild pitch which allowed Beltran to score from third.

The bases were loaded with two outs in the eighth for John Mayberry who doubled and cleared the bases. That gave him his third, fourth, and fifth runs batted in on the night. 7-1 Phils!

Michael Stutes came in for the eighth and allowed a solo home run to the apple in center field to Carlos Beltran. After a ground-rule double by Daniel Murphy, he walked one, and struck out one, making it out alive.

Young, filthy Tony Bastardo came in to do his dirty work against the Mets, and it was glorious. Phillies take game one, and defeat the Mets 7-2.