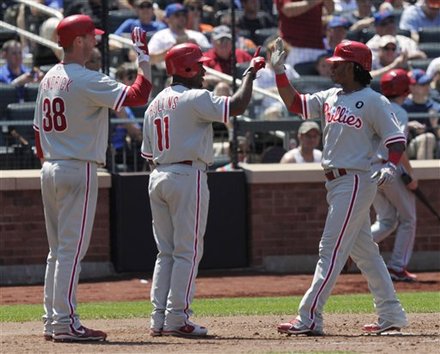 Michael Martinez didn't get many chances early on to make an impact with the team that was giving him a chance. But, with Placido Polanco out with back pain, Martinez was getting a few chances to make his presence known. Last Sunday, he went 4-for-5, setting a career high in hits. Today, he hit another career milestone, as the rest of the Phillies made a complete turnaround from yesterday's disaster of a game to claim the series finale.

Right from the beginning, the Phillies put together a chance to score. Chase Utley walked with two outs in the first, and with the shift on for Ryan Howard, walked into second base with a steal, and even had the chance to swipe third. Utley didn't take the chance, but was clearly frustrated with himself for not noticing the Mets' lapse earlier. Howard made it easy to forget. He singled into right field, and Utley was able to race around to score anyway, and the Phillies had a 1-0 lead.

The Phillies wouldn't pad that lead until the fifth. Michael Martinez did not start yesterday's game, but was back in the lineup today. He was also placed right in the middle of a huge chance in the fifth. With two runners aboard and one out, the Phillies had their best chance to score since the first. Martinez made his presence known by belting a screamer to deep right, and just over the wall for a three-run shot, the first of his Major-League career, and giving the Phillies a comfortable lead.

Martinez wasn't done, as he stepped up again in the seventh, and added a fourth RBI with a sac fly.

Kyle Kendrick wasn't too bad on the mound either. Kendrick escaped jams in each of the first three innings, before settling in to fire seven solid innings. He did allow an RBI single to Scott Hairston in the seventh, but that was the only damage. Kendrick worked his seven innings without the benefit of a strikeout, allowing one run on six hits and three walks.

The Phillies had control the rest of the way. Ross Gload got an RBI by working a bases loaded walk in the eighth. Jimmy Rollins followed with a two-run single.

This one didn't come without some drama. Juan Perez allowed three walks to start the eighth before being pulled for Ryan Madson. Madson allowed one of those runners to cross on a double play, and another to score on an RBI single by Ronny Paulino, but then reloaded the bases on a hit batter and a walk. He then allowed an RBI single to Angel Pagan. That forced Charlie Manuel to turn to his closer, Antonio Bastardo with two outs in the eighth. He struck out Justin Turner to end the inning, and keep the Phillies' lead at four.

Bastardo returned for the ninth, and did allow his first run in 19 appearances, giving up an RBI triple to Lucas Duda, but he did retire the Mets to finish off another Phillies' win, this one an 8-5 victory.

This was a very nice, bounce back game from the Phillies. After yesterday's blowout loss, the Phillies needed a quick turnaround, and they managed to get it by returning to their usual form. Michael Martinez was the offensive star, driving in four runs and hitting his first home run, but Jimmy Rollins, Brian Schneider, Raul Ibanez, and even Kyle Kendrick all managed multi-hit games.

Kendrick was just as solid on the mound, and for the second straight start, and third in his last four, held the opponent to one run. Today's effort brought Kendrick's record back above .500 to 5-4, and lowered his ERA to 3.34. That is the highest of the Phillies' five current starters, and also is tied for the fewest wins among the current rotation, joining Vance Worley with five. You'd think that with two members of the Opening Day rotation out that the bottom of the rotation would suffer. Not even close, as both Kendrick and Worley have been holding this team in ballgames just the same as Roy Halladay, Cole Hamels, and Cliff Lee. Every good start sets the Phillies up for another possible win, and with every win they pick up from here on out, they can start opening the division gap, and inch closer to their fifth straight division title.

The Phillies open a three-game series with the Chicago Cubs tomorrow. They return home after that series for a ten-game homestand.