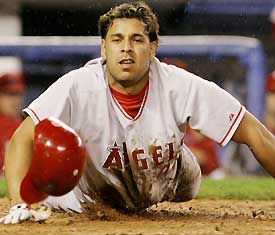 Well, Mike Cameron has been traded to the Florida Marlins, reports Jon Morosi. Cameron was designated for assignment by the Red Sox Thursday before the Red Sox took on the Phillies.

However, Juan Rivera of the Toronto Blue Jays was also designated for assignment and could be a right-handed outfield option for the Phillies.

Rivera was the equivalent of money being thrown in when the Blue Jays traded high-priced Vernon Wells to the Los Angeles Angels of Anaheim (I hate writing "Angels of Anaheim").  Not much was expected of Rivera, and with the emergence of Eric Thames, Rivera was not really needed anymore.

Rivera's numbers are not spectacular, with a .243 batting average, 6 home runs, and 28 RBI.  In other words, he is Ben Francisco.

Turns out the Phillies already have one of those, with a John Mayberry to boot, so the Phillies probably will not be calling on Juan Rivera.