Phillies Even the Series with Cubs in 4-2 Win 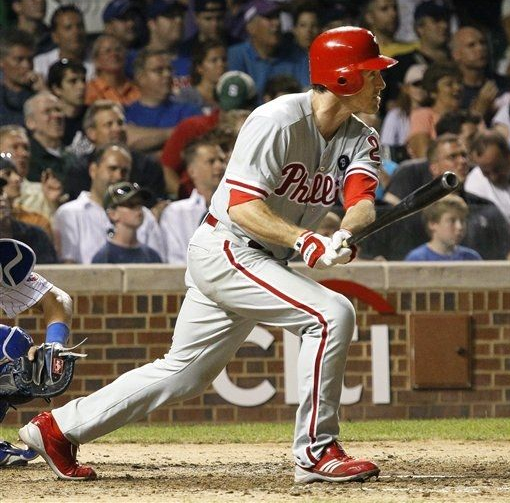 I almost didn't write a recap for tonight's game until the eighth inning, when the Phils finally scored a run. It was quite an ugly game prior to that inning. Of course, the pitching was spectacular from Cliff Lee and the 'pen, but it was just as spectacular from Matt Garza and the Cubs' 'pen.

For the second night in a row, the Cubs took an early lead via home run. Tonight, it was Starlin Castro who shot a two-run homer to left in the first inning. 2-0 Cubs.

The game would remain 2-0 through the next seven innings. Cliff Lee pitched a strong six-inning outing tonight, allowing two earned runs on eight hits, striking out six. It took him four innings to settle in, tossing only five pitches in the fourth.

The Phillies were no-hit through five innings before Dom Brown doubled to left. They wouldn't get another hit until the seventh when they threatened with two men on, but Ross Gload ended the inning on a fly-out.

Chase Utley tied the game in the eighth with a two-run double. He was later tagged out at home on what could have been a potential game-winning play. Fear not, for Michael Martinez was there to save the day. Mini Mart doubled in the ninth inning into right field/the Phillies' bullpen to score Ben Francisco and Jimmy Rollins. 4-2 Phillies.

In comes young, filthy Antonio Bastardo to strike out the side. Nothing out of the ordinary here for the most dominant closer in the league right now.