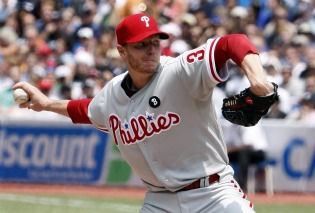 According to a report on CBS Sports, the Phillies are "iffy" on Roy Halladay starting this year's All-Star game.

Phillies pitching coach Rich Dubee is quoted in the piece:

"You're looking at a guy that's leading the league in innings pitched by a pretty good size," Dubee said. "I don't know that you can deny [the starting job]. It would be an honor. But at the same time, this guy is taking on a big workload again, like he always does. We'll wait and see what happens."

Today on MLB Network Radio, National League Manager Bruce Boche mentioned the Atlanta Braves' Jair Jurrjens or Halladay as possible starters, but seemed to indicate that "anyone you ask" would bring up Halladay as a guy to go to for a start.

Personally, I think the Phillies need this home-team advantage in the World Series.  Please let him start.