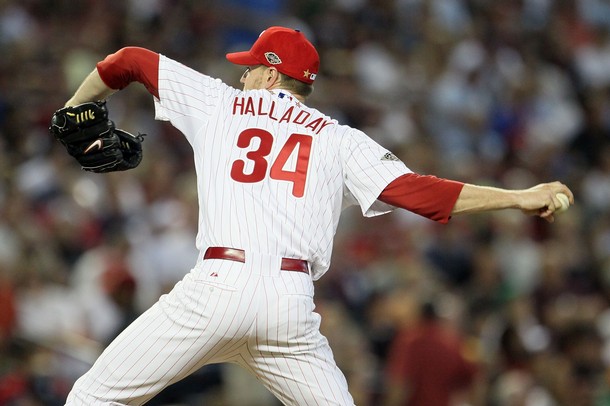 Following Joe Buck's slip-up before the game even started ("From the Mariners, pitcher Felix Hernandez!" *Shows Miguel Cabrera looking around awkwardly*), the 2011 All-Star game was underway! Roy Halladay and Cliff Lee would be the only players from the Phillies to participate, due to injuries to Shane Victorino and Placido Polanco, and Cole Hamels starting Sunday's game, making him unavailable to use in the game.

Halladay did what Halladay does, shut down the opposition. He pitched two perfect innings, tossing 19 pitches. Cliff Lee came in after Roy was done, and pitched a scoreless third before allowing a solo home run to Adrian Gonzalez in the fourth. Jose Bautista and Josh Hamilton singled, and Bruce Bochy had seen enough from Lee. Tyler Clippard finished off the inning.

Carlos Beltran and Matt Kemp both singled off of C.J. Wilson, followed by a bomb to left field from Prince Fielder (made up for his error in the fourth, yes?) which gave the National League a 3-1 lead.

Another run scored for the National League in the fifth inning when Andre Ethier singled off of Jordan Walden to score Rickie Weeks.

Jair Jurrjens allowed one hit in his inning and two-thirds. Fellow Brave Craig Kimbrel relieved him, retiring the side.

Pablo Sandoval smacked a ground-rule double to score Hunter Pence from third, giving the National League a 5-1 lead in the seventh inning. Johnny Venters and Heath Bell combined to pitch a scoreless eighth.

Joel Hanrahan of the Pirates came in for the ninth, and after a few defensive mishaps, Bochy finally put in one of his own, Brian Wilson. With one out, Brian got Michael Cuddyer to pop-up, and Paul Konerko to ground out, ending the game. The National League won it 5-1.