Shane Victorino Home Run Trots All the Way Past Third…on a Foul Ball; is Activated

Shane Victorino has rejoined the Phillies in Chicago and could be in tonight's lineup.  However, Victorino made sure he extra baserunning practice last night playing for the Reading Phillies against the Trenton Thunder.

Victorino led off the game with a long drive down the line, and went into his home run trot.  Despite the home plate umpire signaling it was a foul ball, Victorino missed the call, and the infield umpire did not bother to stop Victorino to tell him the ball was foul.

It took Victorino running past Reading Phillies manager Mark Parent who was coaching third to stop Victorino and tell him.  Shane Victorino tells of his embarrassment in this piece on NJ.com:

“Parent stopped me at third and said, ‘It wasn’t a home run,’” the two-time Gold Glove winner said. “I said, ‘Well, I appreciate you letting me trot around the bases.’ No one stopped me. It was an embarrassing moment.”

Victorino's rehab stint was pretty successful and included a steal of home.

The Phillies lineup surely will welcome him  and his .303 batting average back to the lineup in Chicago.  Let's home he stays clear of beer this time. 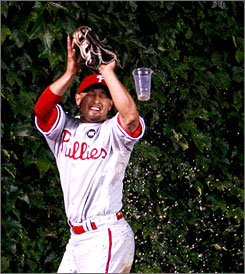