Then and Now: Branko Radivojevic 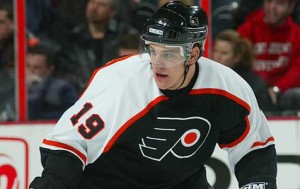 Considering Sean Burke went 6-5-2 in 15 starts before leaving in the off-season, and Ben Eager only had nine goals in 113 games for the Flyers, Branko Radivojevic was Philly's biggest gain in their 2004 trade with the Phoenix Coyotes.

Shipping Mike Comrie to the desert, the Flyers received the trio of Burke, Eager, and Radivojevic in return. Burke didn't play in the 2004 postseason while Eager decided to save his scoring in the playoffs until he was in Chicago. Radivojevic, on the other hand, played in every game during the Flyers' 2004 playoff run serving as a crucial bottom-six forward. Since leaving Philly, let's take a look at what Radivojevic has done with his career.

Coming over to Philly in the latter part of the 2003-2004 regular season, Radivojevic played in 24 games while scoring a goal and posting 8 assists.

Less than a month after being traded to Philadelphia, Radivojevic took part in one of the biggest brawls in recent memory. On March 5, the Ottawa Senators and Flyers totaled 419 penalty minutes including the 25 alotted to Radivojevic. His role in the brawl took place during Robert Esche's and Patrick Lalime's goalie scuffle. While the goalies tangled, Radivojevic held his own against Ottawa center Shaun Van Allen (fast forward to 1:33).

Falling one win short of the Stanley Cup Finals, the Flyers ended up playing in 18 games during the 2004 NHL playoffs. Radivojevic had a goal and an assist in those 18 games, both of which came in the second period of Philly's 7-2 thumping of the Toronto Maple Leafs in Game 5 of the Eastern Conference Semifinals. After assisting on Keith Primeau's goal 44 seconds into the middle stanza, Primeau returned the favor along with Danny Markov to set up Radivojevic 3:10 later to give Philly a 5-1 lead (fast forward to 1:19 for assist and goal).

Radivojevic went scoreless for the remaining eight games in the postseason and played in Europe during the lockout. Playing for two different teams Radivojevic scored 13 goals and assisted on 16 others for 29 points in 45 games splitting time between the Czech Extraliga and the Swedish Elite League.

After the lockout, Radivojevic returned to the Flyers for one more season in 2005-2006. Missing games due to being scratched and an ankle injury in late February, Radivojevic played in 64 games during the regular season posting eight goals and six assists. Among his highlights were a two-goal, three-point game against the Thrashers in November and the game-winning goal in the Flyers' 3-2 win against the Minnesota Wild on December 10th after scoring with just 53 seconds left.

Unfortunately for the Flyers, their 2006 playoff lasted all of six games before bowing out to the Sabres in the Eastern Conference Quarterfinals. Playing in five of the six games, Radivojevic's lone point was a goal that turned out to be the Flyers' final of the season as they lost to the Sabres 7-1 in Game 6. The goal was Radivojevic's last in a Flyers' uniform and his terminal tally in the NHL playoffs.

In July of 2006, Radivojevic left the Flyers to sign with the Minnesota Wild. In his first season with the Wild, Radivojevic played in all 82 regular-season games and posted 24 points, his most in a season since he had 32 splitting time between Phoenix and Philly in the 03-04 season. Eleven of those 24 points were goals, with three of those being game-winners. 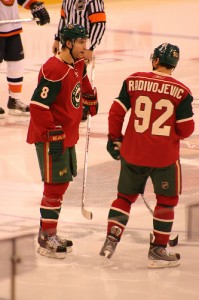 Despite Radivojevic's personal success, the Wild's experience in the 2007 playoffs didn't last long losing to the eventual Cup-winning Anaheim Ducks in five games during the Western Conference Quarterfinals. Radivojevic played in all five games but failed to record a point.

Returning to the Wild for the 2007-2008 season, Radivojevic had seven less points while playing in nine less games. Missing games due to a sore neck, Radivojevic had seven goals and 10 assists leading up to the 2008 NHL playoffs. Losing in the Western Conference Quarterfinals for the second straight year, the Wild fell to the Colorado Avalanche in six games. Missing Games 3,4, and 5 of the series due to a right knee injury, Radivojevic was held pointless again in two playoff games. 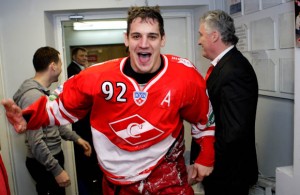 Later in the 2009-2010 season, Radivojevic represented his home country of Slovakia at the 2010 Winter Olympics. He was held pointless in seven games. 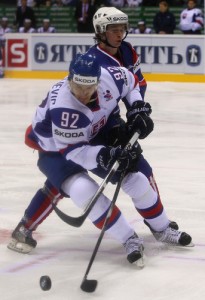 This past season, Radivojevic saw his point totals drop slightly while he witnessed Denis Bodrov and Dominik Hasek become his teammates. In 54 games, Radivojevic had his lowest totals yet in the KHL for goals, assists, and points during the regular season posting seven goals and 23 assists for 30 points. Returning to the common trend in his career of performing in the playoffs while his team falters, Radivojevic had two goals and three assists in four games before his team exited the playoffs.

Radivojevic didn't have an outstanding NHL career has he had 120 points in 393 regular season games and 3 points in 31 playoffs games, but he did serve as a strong role player. Known more for his supporting role in Philly, Radivojevic has definitely made his mark in the KHL.