Then and Now: Bruno St. Jacques

In his 12 years as a professional hockey player, Bruno St. Jacques has never scored 10 goals or 30 points in a season. Playing in three different professional leagues, it seems as though St. Jacques plays best in the Deutsche Eishockey Liga (DEL). With 61 points and a plus/minus rating of +19 in 138 regular season games over the last three seasons, St. Jacques' numbers in the DEL aren't impressive, but they're the highest in his career to this point. Let's take a look at St. Jacques' career since his last game with the Flyers on December 18th, 2002 against the Atlanta Thrashers.

After not playing the rest of December and for the whole month of January, St. Jacques was traded, along with Pavel Brendl, to the Carolina Hurricanes for Sami Kapanen and Ryan Bast. St. Jacques departed with the Flyers going pointless in 13 games total. 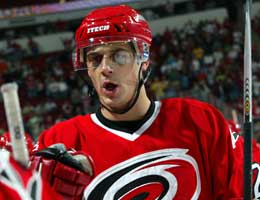 "Bruno is still developing as an NHL defenseman, but we feel he has a very good chance at playing for the Hurricanes in the near future," Hurricanes' GM Jim Rutherford told the Hurricanes website following the February 7,2003 trade. St. Jacques followed through in Rutherford's words by making his first start for the Hurricanes 19 days later against the Phoenix Coyotes. In just over 15 minutes of ice time, St. Jacques had one shot and a plus/minus rating of -2. St. Jacques ended up splitting time between the Hurricanes and their AHL affiliate, the Lowell Lock Monsters, for the remainder of the season. In 18 games with the Canes, St. Jacques had two goals, one of which was his first NHL goal against the Pittsburgh Penguins on March 6th while the other was against the Flyers a week later on the 13th. He'd also have five assists with Carolina while he had one goal and one assist in eight games for the Monsters.

The following season St. Jacques went scoreless in 41 games between the Hurricanes and the Monsters. In 35 games with the Hurricanes, St. Jacques had no goals and two assists. Considering he didn't average 12 minutes of ice time per game (11:49) and had only 16 shots during the season, it's no surprise St. Jacques didn't register a goal. His numbers weren't better in his six games with the Monsters as he went pointless with eight PIM and a plus/minus rating of -4.

Since the Hurricanes weren't playing in the 2004-2005 season due to the lockout, St. Jacques played all of his games with the Monsters. Playing in 68 games, the most games he played in a season since going pro, St. Jacques had two goals and 12 assists while posting a strong +24 rating. One of St. Jacques better seasons coincidentally resulted in his team making the playoffs for the first time since he was part of the 2002 Philadelphia Phantoms' playoff run. After the Monsters beat the Hartford Wolf Pack, now the Connecticut Whale, in six games, they'd bow out in five games to the Providence Bruins. During the 11-game run, St. Jacques took part in each game recording one goal and four assists.

Returning to the playoffs for a second straight year, St. Jacques' best season kept getting better with his postseason performance. As the Pirates were knocked out one game short of the AHL Finals by the eventual Calder Cup Champion Hersey Bears, St. Jacques played in 14 of their 19 games scoring three goals and posting four assists.

Three months into the next season, St. Jacques was traded for the second time in as many seasons. Along with PA Parenteau, St. Jacques was shipped to the Chicago Blackhawks for Sebastien Caron, Matt Keith, and Chris Durno.

"St. Jacques is a well-rounded defenseman who is an above average skater with offensive ability," Blackhawks' Director of Hockey Operations Stan Bowman told the Blackhawks' website. "He has an edge to his game and he gives us a veteran who has NHL experience." St. Jacques never played for the Blackhawks, but did play in 37 games for their AHL affiliate, the Norfolk Admirals. He'd have four goals and eight assists along with two assists in six playoff games before being released in July 2007.

For the start of the 2007-2008 regular season, St. Jacques signed with the Syracuse Crunch as he failed to make the Toronto Maple Leafs' roster after an invitation to training camp. After eight assists in 13 games for the Crunch, St. Jacques was traded back to the Ducks' organization along with Geoff Platt in exchange for Aaron Rome and Clay Wilson. He'd post 20 points in 48 games for the club before the beginning of the postseason. In his final six games to date in North America, St. Jacques had three assists while the Pirates fell one game short of the Calder Cup Finals for the second time in three years.

Playing in five more games the next season, and with the accompaniment of new teammate Pat Kavanagh, St. Jacques tied his career high with nine goals and had just one less assist for 24 points during the regular season. Despite his slight decrease in performance, St. Jacques experienced the DEL playoffs for the first time in his career. As ERC Ingolstadt lost in the semifinals, St. Jacques played in four games notching an assist. This past season, St. Jacques was joined by Jared Ross and Colin Forbes as ERC Ingolstadt won 28 of 52 games. St. Jacques played in every game scoring five goals and registering eight assists.

His time with the Flyers was brief, but considering he's been on nine different teams in three different leagues over the last 12 years St. Jacques' time most places hasn't been too long. In fact, St. Jacques will be playing on his tenth different team next season as he joins the Straubing Tigers. If St. Jacques performs well in Straubing he has the possiblity to be rememberd as a solid player in the DEL.