(Spoiler Alert: The following was originally posted on July 25, 2033, as part of BleacherReportPhilly's Hall of Fame Induction coverage. It may contain spoilers if read prior to that date.) 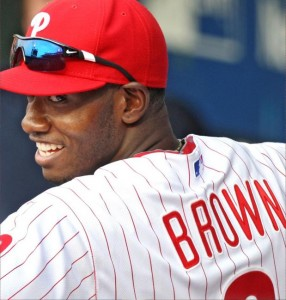 Former Phillies' outfielder Domonic Brown was enshrined in Major League Baseball's Hall of Fame today, as the once-proud institution continued to lower their standards for inclusion. The underachieving Brown spent all seventeen years of his MLB career in Philadelphia, as General Manager Ruben Amaro, Jr., and his successor, Scott Proefrock, repeatedly failed to cash in on the lazy rightfielder's plummeting trade value. Brown was an innocent bystander on twelve World Championship squads, as the selfish cleanup hitter reaped the benefits of a consistently strong surrounding cast.

Brown, who had notably poor baseball instincts, was best-known for his second-inning baserunning blunder in Game 4 of the 2016 World Series. Brown singled to start the inning, but was picked off first base by Blue Jays' starter Kyle Drabek, who took advantage of Brown's inattentiveness. (Replays indicated that the lackadaisical Brown should have been called safe, but a true gamer would never have put himself in that position to begin with.) Brown would later hit a pair of three-run homers in the game, his fourth and fifth of the Series, providing unnecessary offense in the Phillies' 13-1 sweep-clinching victory.

The overrated Brown made a career of fattening his statistics in meaningless situations. Brown frequently took advantage of his friendly home ballpark, hitting 212 of his 549 career homers at Citizens Bank Park. (Much to the chagrin of Phillies' fans, Brown finished his career atop the franchise's home run list, displacing the highly-popular Mike Schmidt, a true and exemplary Hall-of-Famer.) Brown collected three Triple Crowns, benefitting from poor and unlucky seasons by other, superior ballplayers, in addition to the advantage of never having to face the Phillies' dominant pitching staff. Excessively patient at the plate, the overpaid Brown paced the NL in walks eight times, despite being highly-compensated to actually contribute offensively. Brown always fared well in contemporary defensive metrics, but anyone who saw him play on a regular basis noticed his poor route-taking, his inaccurate arm, and his general apathy in the outfield.

Brown's Induction Speech was given by former Phillies' second-baseman Chase Utley. Utley, unlike Brown, is a true and exemplary Hall of Famer. Utley's speech wisely focused on Brown's actions outside the lines, including the highly-succesful Brown Foundation. BF managed to eradicate crime and illiteracy in the State of Pennsylvania, through little fault of the penurious Brown. Brown donated a mere 91% of his career earnings to the Foundation, while splurging on non-essentials for himself, such as his luxurious 800 sq. ft. home in Northeast Philadelphia's ritzy Holmesburg area.