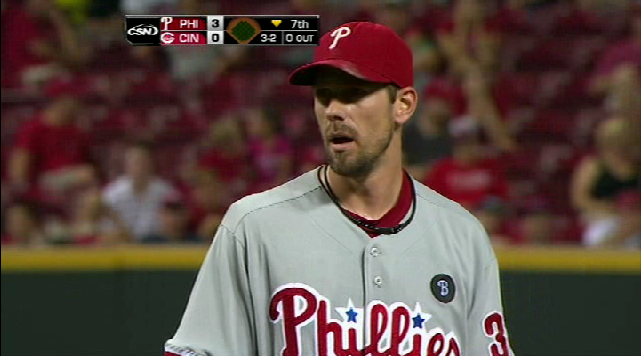 Clifton Phifer Lee and Dontrelle Willis, two pitchers who really like to hit. Their bats were quiet tonight, though, as Cliff Lee left his teammates to do the scoring. The Reds, well, they were trying to hit against Cliff Lee, which usually never works for anyone.

Some fantastic base running from Shane Victorino helped score the first run of the game for the Phils in the first inning, on Ryan Howard's fielder's choice groundout.

Another run wouldn't score until the top of the sixth; Hunter Pence hit his 18th home run of the season, seventh with the Phillies, second of this series. 2-0 Phillies.

Chase Utley grounded into a fielder's choice in the seventh inning, scoring Shane Victorino from third. 3-0.

Cliff Lee, as per usual, was straight up dealing. By the eighth inning, Cliff Lee had only allowed five hits, and nothing else, while striking out seven. Those seven strikeouts put him at 199 on the season, which is a career-high for Lee. Cliff went back in to finish what he started– a masterpiece. He allowed a double to Joey Votto and walked Jay Bruce, his first walk of the night. After hitting Miguel Cairo, Charlie Manuel decided that Cliff Lee was finished.

Ryan Madson thankfully got Yonder Alonso to pop-up, ending the ballgame. The Phillies have now shut out the opposition in 19 games, which tops the Major League. Cliff Lee has now won his fifth game in August, and 15th game on the season, tossing 30.2 scoreless innings on the road. Wow.

Likely series sweep tomorrow at 12:35 in the afternoon. Vance Worley against Mike Leake. Be there or be square.