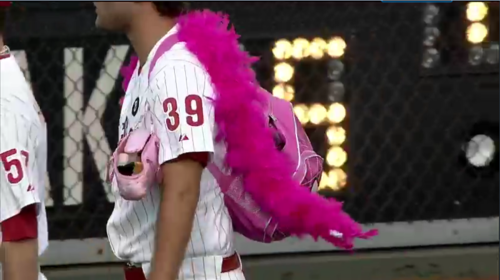 Courtesy of Kate (Waterlady) on Tumblr

What you're looking at is the 6' 8" relief pitcher Michael Schwimer, who walked to the bullpen at Citizens Bank Park for the first time, sporting Michael Stutes' old backpack.

Schwim wouldn't be needed tonight though, because it was all about Cliff Lee for seven innings. He allowed two earned runs, which was a home run to Goldschmidt in the second inning. He walked two, struck out seven, and allowed three hits all night.

Behind Cliff was some impressive offense which came a little late in the game. Following Jimmy Rollins' lead off homer in the first, Hunter Pence scored from second on John Mayberry's single in the second inning.

The game was tied at two a piece until the seventh inning, which was a whole lot of fun. Pence kicked off the inning by drawing a walk, followed by Mayberry's single. Wilson Valdez, who started at third base tonight, sent a ball deep to center field, over the head of Chris Young, scoring both Hunter and John. With Ben Francisco in to pinch-hit for Cliff Lee, Wilson Valdez scored on a sacrifice fly which once again, went deep to center field. The Phillies continued to threaten with Rollins and Victorino both singling and double stealing, but only those three runs would score in the inning. 5-2 Phillies.

Young, filthy, apathetic, sneezing, trusty, lefty specialist Antonio Bastardo pitched a quick 1-2-3 inning. Ziegler wouldn't have such luck in his portion of the eighth. The bases were loaded with zero outs after Pence, Mayberry, and Valdez singled, Valdez's ball turning out to be an error which scored Howard. With Zach Duke now in to pitch, Brian Schneider smacked an RBI single to left, scoring Pence, continuing the death by singles to the D'Backs. Raul Ibanez popped-out in his pinch-hit appearance, followed by a sacrifice fly by Rollins which scored Mayberry. Valdez cruised on home on Shane Victorino's double to left. If you're keeping score, the Phillies were then up 9-2. Finally, the inning ended afer Chase Utley, who went hitless tonight, popped-out.

You would think that with a seven-run lead, Charlie would send Schwim to end the game, right? I mean, you've got to let him into his first big league game with a comfy lead, just in case his nerves get the best of him. Charlie and I must not think the same way, apparently. Madson closed it out, walking one, and getting Chris Young to pop-up for the final out.

Phils take game two, and will send Vance Worley to the mound tomorrow night against Ian Kennedy for the rubber match of the series. Let's hope that Kennedy doesn't completely own the entire lineup again.