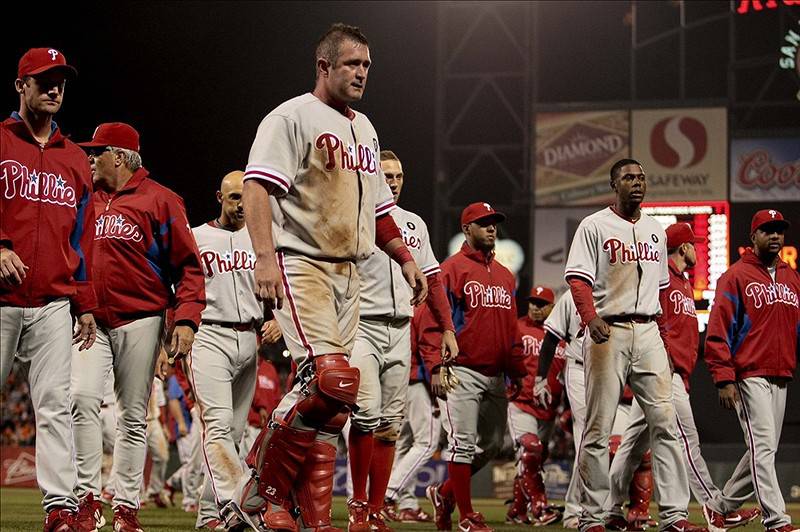 Courtesy of The 700 Level

I wouldn't want to face a team with game faces like that. Yikes. Even worse for the Giants, Cole Hamels started today against Matt Cain.

Some early offense to back up Hamels gave the Phillies a comfortable lead after one inning. Jimmy Rollins scored on Hunter Pence's single, and Chase Utley scored on a passed ball to Eli Whiteside. Hunter Pence has now hit at least once in every game he has played as a Phillie. The Phillies are also undefeated since acquiring him from Houston. He can stay.

Hamels was absolutely dealing, as per usual, against the Giants this afternoon. However, so was Matt Cain, who has plenty of success against slugger Ryan Howard, and apparently Cole Hamels.

The Giants threatened in the eighth with two men on, but Aaron Rowand popped-up to end the inning. Michael Martinez covered third for Polanco, who left the game due to left hip soreness, sources say.

Pablo Sandoval ruined the shutout by slicing a home run to left field, putting the Giants on the board in the ninth. The one run was all they would get today, though.

Cole Hamels today pitched a beautiful complete game, allowing six hits, walking none, and striking out five. He collected his 13th win this season. Phillies have taken three of four so far, and will go for the sweep tomorrow afternoon with Roy Oswalt starting for the first time since June 23.

Also, the Phillies are currently riding a nine-game winning streak!