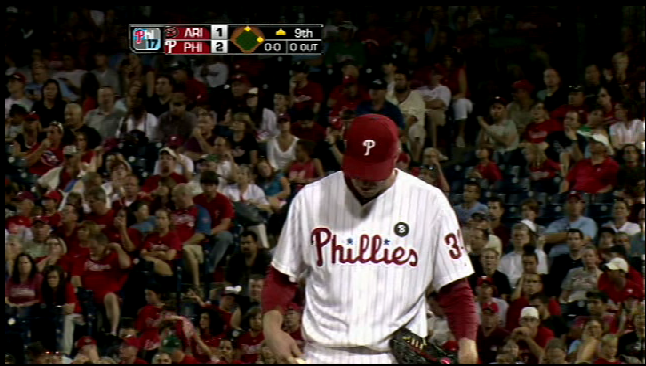 Two first place teams, the Arizona Diamondbacks and our Phillies started a three-game series tonight with Roy Halladay starting against Josh Collmenter. But, not before Jimmy Rollins and Steve Carlton unveiled the brand new statue of Hall of Fame broadcaster, Harry Kalas. Opening ceremonies were, as expected, beautiful and touching, leaving the hearts of Phillies fans hurting in the absence of Harry. Phillies fans donated towards the statue, starting a Facebook petition which brought the statue to Citizens Bank Park.

As for the ballgame, well, what else would you expect with Doc on the mound? A few shaky innings by Doc started the game, allowing a run to score in the second inning on Lyle Overbay's single. After that, Roy shut down the D'Backs, striking out fourteen in his nine-inning outing.

Shane Victorino sliced a two-run homer in the fifth, putting the Phils on the board and giving them a one-run lead. Unfortunately, Doc was tested a bit in the ninth, and after allowing a two-run double to Lyle Overbay, the Diamondbacks had taken a 3-2 lead. Putz, going for his 30th save of the season, walked Carlos Ruiz but struck out Jimmy Rollins to end the ball game.