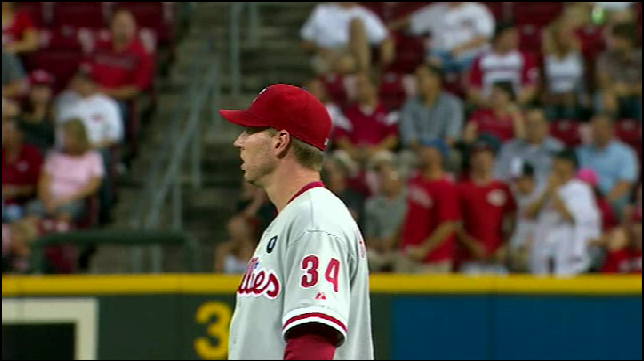 You don't mess with this man, Cincinnati, and you should have learned that lesson last October.

The Phillies, however, love to mess with Bronson Arroyo. Arroyo's last start against the Phillies resulted in a 10-3 loss, Arroyo allowing nine earned runs on ten hits in 2.2 innings. Laughable.

The Phillies were surprisingly shut down throughout the first three innings, as were the Reds. In the fourth, Ryan Howard launched home run number 28 of the season, scoring Chase Utley. That puts Howard at 100 RBI, his sixth consecutive season of 100+ RBI, which is the most by any Phillie, ever.

In the top of the sixth inning, Hunter Pence smacked out career hit number 800, and did so via home run, which put the Phillies up 3-0. The bases were loaded for Roy Hallladay following, and Roy drilled a double down the right field line, clearing the bases. It was Halladay's second career extra-base hit, and his first, second, and third RBI's of the year. 6-0 Phillies.

In the top of the seventh, Raul Ibanez homered to right field to score Hunter Pence, pushing the lead to 8-0.

After Roy Halladay walked Joey Votto in the first inning, he retired every single batter he faced until Joey Votto doubled in the seventh inning. Halladay had retired 18 straight batters. After seven innings, Roy was done. He allowed two hits, walked two, and struck out nine, shutting out the Reds.

Brad Lidge pitched a scoreless eighth, walking the leadoff batter, allowing a single to Votto, and striking out Jay Bruce on a slider to end the inning. Nothin' special.

Here's somethin' special, Ryan Howard murdered a baseball, sending it to right field for his 29th homer this season. 9-0 Phillies.

Charlie Manuel called in Michael Schwimer to secure the shutout, which he did, tossing a scoreless ninth. Phils win 9-0.

Since it's a four-game series, the Phils will go for the series win tomorrow night with Cliff Lee on the mound against Dontrelle Willis.