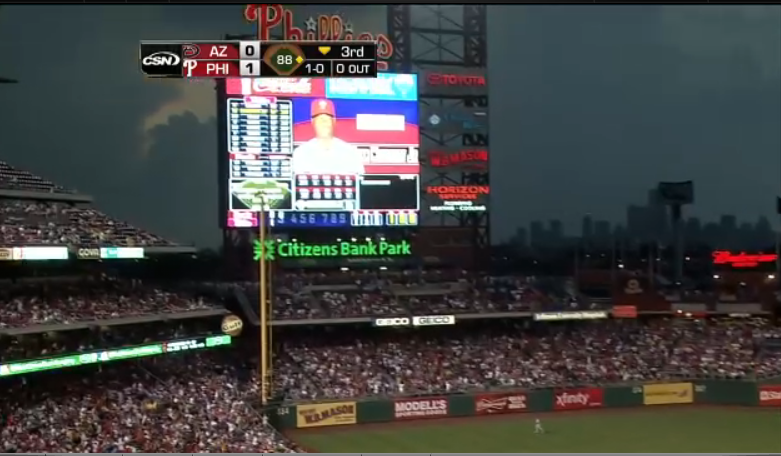 Mayberry homers into the ominous sky as storms approach

In the rubber match of this Diamondbacks-Phillies series, Vance Worley took the mound against one of the better starters in the National League. Fear not, for Vance Worley has not lost a game since May 31st. I know, I know, wins and losses don't mean a whole lot, but it makes sense in his case.

In the bottom of the second, Wilson Valdez put the Phillies on the board with an RBI double which scored Ibanez. John Mayberry swung for the fences in left to score two in the third inning.

After what felt like the longest rain delay ever, David Herndon took the mound in the fourth inning around 10:20. He struck out the side in the fifth, all swinging, and pitched three scoreless frames tonight.

Chase Utley scored on Raul Ibanez's double in the fifth inning, giving the Phils a 4-0 lead.

Michael Stutes gave up a home run to Goldschmidt in the eight, which would end up being the only run scored for the D'Backs. That was also the end of Stutes, who pitched to one batter.

Antonio Bastardo was filthy once more in the eighth inning after Stutes was pulled. Tony struck out two, both swinging. Ryan Madson closed it out perfectly, securing the 4-1 lead.

Onto Washington, D.C., to take on the Nationals. Oswalt vs. Livan Hernandez for game one tomorrow night.