Mayberry Ties it in the Ninth, Victorino Scores Winning Run in Tenth Against Rockies 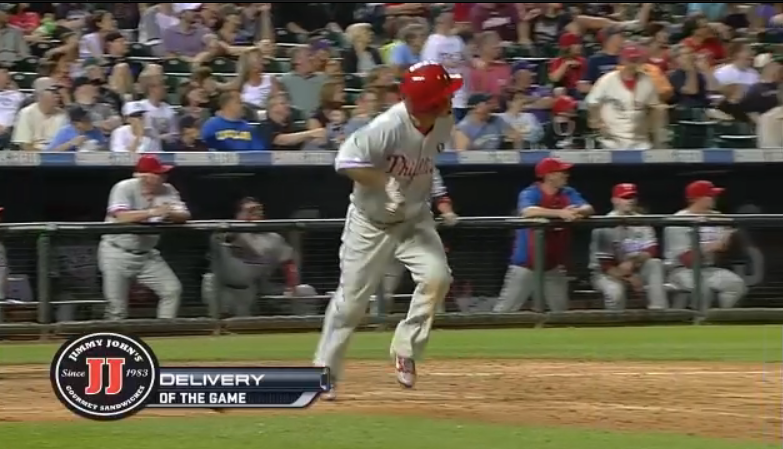 The Rockies took an early 2-0 lead in the third inning when Seth Smith homered to score Ty Wigginton.

Raul Ibanez (who else?) doubled in the first run for the Phillies tonight in the seventh inning. Hunter Pence scored after he had singled to get on base.

Cole Hamels pitched tremendously, allowing two earned runs on six hits in six innings, striking out five and walking one. Michael Stutes replaced him in the seventh, giving up a homerun to Chris Iannetta which gave the Rockies a 3-1 lead. Stutes pitched two innings, walking two and allowing that one run to score. Off night, I suppose.

Huston Street came in to seal the deal for the Rocks, but John Mayberry had other plans. With Carlos Ruiz on second, Mayberry killed a baseball to tie the game.

Young, filthy Antonio Bastardo pitched a scoreless ninth, and thank God he did, because in the tenth inning, Shane Victorino homered to give the Phillies a 4-3 lead. This is now Shane's third consecutive year with a quadruple double- double digits in steals, doubles, triples, and home runs. The Rockies couldn't come back, losing to the Phils 4-3.

Kyle Kendrick tomorrow night for likely the last time for a while with Oswalt due back before Kendrick's next scheduled start. He will face Aaron Cook who is 1-6 against the Phillies lifetime. Ross Gload and Placido Polanco have had the most success against him; Gload hitting .778 and Polanco hitting .600.