Need a LOOGY? Taking a Look at Arthur Rhodes Makes Sense for the Phillies 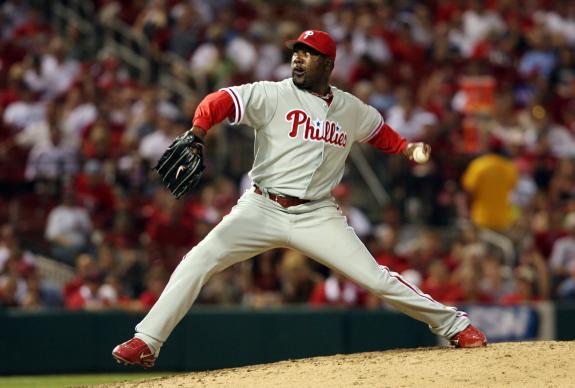 Well, he wasn't that great last time he was in Philly, but Arthur Rhodes just may make sense for the Phillies heading down the stretch.  Rhodes was recently designated for assignment by the Texas Rangers to make room for newly-acquired Mike Adams.

The Phillies reportedly considered Rhodes in the offseason as a left-handed option in the bullpen before deciding to take one more chance with reliever J.C. Romero.   Romero did not measure up to expectations and was released.   Since Romero was released, the Phillies often only had journeyman Juan Perez as an option in the middle innings, as the other left-handed reliever Antonio Bastardo was closing games.

Left-handed hitters batted .216 against Rhodes this season in 32 games for the Texas Rangers.  He could be effective for the Phillies being used as a LOOGY – (Lefty One Out GuY) in the middle innings, and be more reliable that the unpredictable Juan Perez.

While Perez had two memorable outings against the Atlanta Braves, he walked the bases loaded against the Mets in his subsequent outing.  He also appeared in Saturday's game and got two outs.  Perez has spent his career as a journeyman, and it is rather uncertain what he could give the Phillies down the stretch.  Rhodes is a veteran, known commodity.

Recently designated for assignment, Rhodes would have to clear waivers before he could be traded to the Phillies.   It's very possible that someone will claim Rhodes, who is owed very little money the rest of the sesaon.  If Rhodes is given his outright release, he would be free to sign with whatever team he chooses.

Yes, 2006 with the Phillies was one of Rhodes' worst seasons in his major league career.  However, this team is better and would use him much differently.  Why not give him a shot?