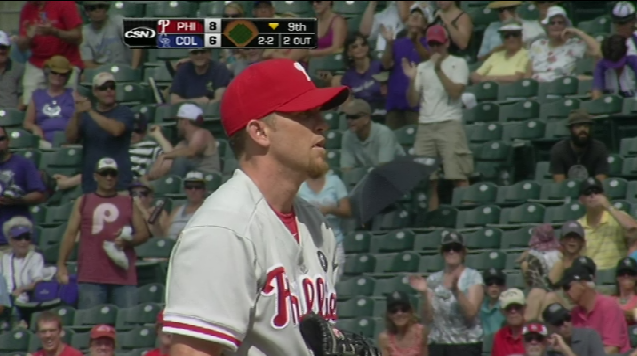 After watching two games that looked like a familiar brand of Phillies’ baseball, today’s game was just plain goofy. And in the end, the Phillies were the ones on the good end again. The Phillies managed to complete their second straight sweep, and sixth straight win, by taking a wild afternoon affair from the Rockies.

From the start, the Phillies had something going off Jason Hammel. Much like last night’s win, the Rockies gave the Phillies an early chance. Three straight walks loaded the bases for the Phillies, as Hammel missed with 12 of his first 15 pitches. From there, he was better, as he struck out Ryan Howard. Hunter Pence did drive in a run with a sac fly, but a strikeout of Raul Ibanez limited the damage.

That would cost the Phillies in the bottom of the first. A leadoff bunt attempt sailed over the head of Ryan Howard, allowing Eric Young Jr. to reach. He stole second, and would score on more antics at first base. Ryan Howard failed to cleanly field a weak roller by Dexter Fowler twice, then flipped the ball wildly over the head of Roy Halladay. Young motored around from second to score, as Fowler took second. Fowler would score two batters later on a sac fly by Troy Tulowitzki.

At that point it was evident this was not your ordinary game. But the Phillies don’t seem to be too phased by anything anymore. They came back with an even strong effort in the second. Carlos Ruiz singled to lead off the inning, and moved to second on a one-out sac bunt by Halladay. Jimmy Rollins brought Chooch home with a single, and took second on a wild throw from right. Shane Victorino followed with an RBI single to put the Phillies back on top. After Chase Utley was hit by a pitch, Howard got his shot at redemption. He got it in a big way. He belted a two-run double off the wall in center, scoring both runners, and adding to the Phillies lead.

Eliezer Alfonso brought the Rockies closer in the second with an RBI double. Todd Helton cut the lead to one in the third with an RBI single.

The Phillies managed to add another run in the fourth. Roy Halladay singled to lead off the frame. With Chase Utley and Ryan Howard reaching on a single and walk respectably, it loaded the bases for Hunter Pence. Down in the count 1-2, a pitch got away from Alfonso, and Halladay managed to slide under the tag from Hammel to score.

The Rockies narrowed the gap again in the fifth, as a triple by Dexter Fowler led to a run on a groundout by Todd Helton.

The Phillies certainly showed no panic, as Howard continued to add to his strong series. In the sixth, he blasted a two-run shot to center.

But, Bastardo recovered to finish off the eighth, and Brad Lidge picked up his 100th save as a Phillie in the ninth, as the Phillies completed the sweep of the Rockies with an 8-6 win.

Today’s game had a little bit of everything, but nothing the Phillies couldn’t work with. Early errors, some early hiccups at the plate, and even some unfortunate hits from the Rockies made it look like the Phillies had their work cut out for them.

Even with his early struggles, Roy Halladay managed to come away with his 14th win of the season, dealing another masterful game.

Ryan Howard continued his hot stretch at the plate, going 2-for-4 with a double, a home run, and 4 RBIs. Hunter Pence added to his strong start with the Phils, picking up another hit. Since joining the team, he has hit safely in every game. Chase Utley also turned in a 2-for-3 day at the plate.

Overall, as with each of their last six on this winning streak, the Phillies had to group together to win. They did that once again, and carry a massive, by other teams’ standards anyway, eight-game division lead and 71-39 record, into a four-game series with the defending World Champion Giants, who have been reeling since leaving Philadelphia with two wins in a three-game set.