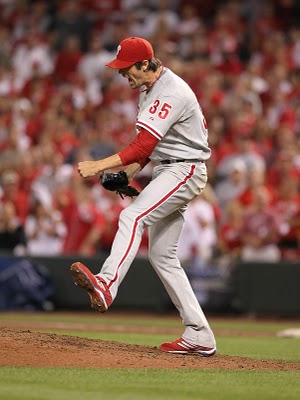 Remember this? Of course you do. It's no secret that Cole Hamels completely dominates the Reds, and he has showed us that with a career 1.23 ERA with a record of 8-0 including the postseason against Cincinnati.

Cole's start tonight marked his first start since August 12th, his shoulder inflammation placed him on the disabled list, and was activated today. He shut down the Reds throughout the first five innings, striking out one and allowing one run to score on one hit, a triple hit by Brandon Phillips which was misplayed by Hunter Pence.

The Phillies' tied the game in the fifth inning with John Mayberry, Jr scoring on Wilson Valdez's double to left field. Mayberry started in left field tonight for Raul Ibanez…again.

Hamels' night was done after six innings, tossing 76 pitches. He looked great allowing just two hits and striking out seven, walking none. Nothing wrong, he was just eased back into pitching after being out for 17 days.

Young, filthy, fatherless Antonio Bastardo did his dirty work in the seventh inning, walking one, but striking out three. Filthy, filthy, filthy.

With a 1-1 game going on in the top of the eighth inning, Shane Victorino homered to right field to make it a 3-1 game. Let the MVP chants resume.

Michael Stutes, who has made us all suffer heart attacks as of late, pitched yet another shaky inning, allowing a run to score on three hits. He faced six batters, striking out one. 3-2 game heading into the ninth.

Ryan Madson came in to pick up the save for the Phils, and did just that, striking out one.

Over the next 30 days, the Phils will play 32 games. Today marked the first day back from a weekend wash-out, and there are no off day's from here.

Game two of this series will be played tomorrow night with Roy Halladay going for win number 16 against the 8-10 Bronson Arroyo who is starting to really heat up.