The Time To Stop Booing Jayson Werth Is Now 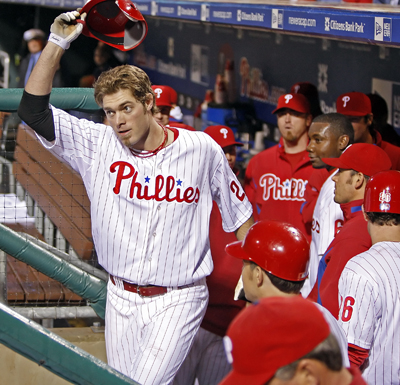 I want to start this post off by saying this. I have no right to tell you how to act once you've spent your hard earned money to go to a baseball game. Tickets, parking, food, and all of the other expenses that go into seeing a game can be through the roof. However, this is a blog, which is perfect for stating opinions and having educated disagreements. Having said that, I think we as Phillies fans, need to stop booing Jayson Werth. I know it’s not everyone, but as seen and heard in Washington this weekend, people are still very bitter that he chose to sign with the Nationals this past offseason. Let Jayson go.

But Steve, he was greedy and signed with the enemy!

Sure, he signed with a divisional rival. However, he did not sign with the Braves, Mets, or Yankees who are undoubtedly considered our three biggest rivals. He signed with the lowly Nationals, a team that, at the beginning of the year, had dreams of finishing .500. They didn’t dream about making a playoff run or contending for a division. Yes, Jayson took a ridiculous contract that he’s shown he does not deserve. However, the easiest argument I have for why we should just leave him alone already is this; wouldn’t you have done the same? The guy suffered through injuries early in his career, finally got a chance to establish himself as a solid player, won a world championship and then cashed in. He is set for life now. His kids are set for life now. His kid’s kids… and so on.

Did he trade team success for financial stability? Yes, and most of you would have done the same. If the Phillies had offered anything near a seven year contract, despite the amount of money, then I could understand the booing. But, the Phillies offer wasn’t even close. Let Jayson go.

Then there’s the other way to look at this situation. Why are we as Phillies fans wasting our energy and giving Mr.Werth the satisfaction of booing him? Here we are, with the best record in baseball, staring at our fifth consecutive division championship and we are wasting our energy on booing a guy who was a slightly above average player here. Sure, he was a fan favorite, but he is gone now. He cashed in. Good for him. He can watch the playoffs from his $126 million couch in October for the next seven years. We’ll be busy contending. Let Jayson go.

When you look out in right field now, you see arguably an even better fit for this team in Hunter Pence. The guy does everything the right way. He’s the right handed hitting, outfield playing version of Chase Utley. We upgraded. Let Jayson go.

The best comparison I can think of is Aaron Rowand. Aaron only played for the Phillies for two seasons. Most would argue that he is only remembered for his time here as having made one catch. That’s all. He was an average player here who planted his face on the wall and won over the fanbase, and I understand that. He did not help this team win it all, yet it seems like he is welcomed with cheers, and not boos, when he comes to town as a visiting player. Meanwhile, Jayson gets booed constantly whether at home or on the road. How is Jimmy Rollins going to be treated if he signed elsewhere after this season? The Phillies may make an offer around three years, $30 to $36 million dollars. What if the Giants or the Red Sox offer him a five year deal and he takes it? Are you telling me you’re going to hold that against him and boo him too? Let Jayson go.

The last comparison I can make is this. Booing Jayson Werth is like being hung up on the girlfriend that left you. You had some great times and you thought it was getting serious, then she moved to a new city for a new job. She still cares about you, but you’re bitter. How DARE she put her life and her future and her goals ahead of you? She left. Meanwhile, we can’t move on. We still call her 18 games, I mean times, a year and leave her messages about how we don’t agree with her walking out on us. Let Jayson go.

In the end, as stated before, we will be contending for championships in the near future and Jayson and the Nationals will not. He is a World Series hero for this city, helping us break a curse that haunted our city for 28 excruciating years. He’s gone now and while you don’t have to give him a standing ovation every game, maybe stop booing him. Let’s put the Jayson Werth era behind us and instead give ovations and respect to our new, hungry right fielder. Let Jayson go.