Then and Now: Jim Vandermeer 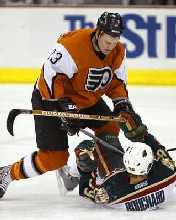 Jim Vandermeer has played in 457 NHL games over his 10-year professional career. Of those 457, just 83 had been with the Philadelphia Flyers. Becoming a professional with the Philadelphia Phantoms in 2001, Vandermeer joined the Flyers' roster a year later playing in several games for both clubs over the next two seasons. Since his playing days with Philly back in the 2003-2004 season, Vandermeer has played on several teams including a brief return to the Flyers. Let's take a look at Vandermeer's brief but well-traveled career.

In February of 2004, Vandermeer's first stint with the Flyers ended as he was traded to the Chicago Blackhawks with Colin Fraser and a 2nd-round pick in the 2004 draft for Alexei Zhamnov and a 4th-round pick in the same draft. Zhamnov helped the Flyers reach the Eastern Conference Finals as he scored four goals and had 10 assists in the 18-game span. The trade was definitely beneficial for the moment and not so much for the future considering Vandermeer, Fraser, and Bryan Bickell (2nd round pick) are all still in the league while Zhamnov left Philly after 2004 and R.J. Anderson (4th round pick) has never seen the NHL.

Finishing out the '03-'04 season with the Blackhawks, Vandermeer displayed more offense than expected out of the physical defenseman. In 23 games, Vandermeer had two goals and 10 assists for 12 points, four of which came during a four-game point-streak in March. 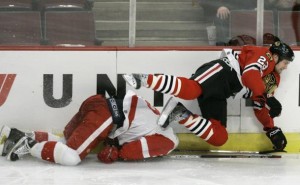 Staying within the Chicago organization during the lockout, Vandermeer played 52 games for the Norfolk Admirals, Chicago's AHL affiliate. Skating with Matt Ellison and Michael Leighton, Vandermeer actually posted fewer points during the 2004-2005 than he did in the previous campaign despite playing in three more games and playing against AHL-talent all season long. With three goals and 10 assists, Vandermeer's point total dropped six points from the prior season.

The following season would be the first in which he spent the entire season in the NHL. In 76 games with the 'Hawks, Vandermeer tallied six goals and 18 assists. His best game came in November against the Blues where he scored two goals, including the game-winner (assisted by none other than Matthew Barnaby and Jim Dowd), and was the First Star selection. This season also saw Vandermeer's only suspension in the NHL as he sat out two games for a dangerous high-sticking penalty on Vancouver's Daniel Sedin.

Re-signed by the Blackhawks on August 1st to a one-year deal, Vandermeer experienced another full season with Chicago. Unfortunately, he'd only play in 46 games as he sat out 33 games due to breaking his right ankle. In those 46 games, Vandermeer had a goal and six assists. Three of Vandermeer's seven points that year came against the Columbus Blue Jackets.

Even with the injury, the 'Hawks liked what they saw in Vandermeer and re-signed him yet again in the 2007 offseason. However, as opposed to the previous two seasons, Vandermeer didn't see his season come to a close in the Windy City. After posting two goals and seven assists in 26 games for the Blackhawks, Vandermeer was shipped back to Philly in exchange for Ben Eager.

In his final 28 games with the Flyers, Vandermeer had five assists and registered just one goal — which helped the Flyers beat the Penguins in late January as well as causing Ty Conklin to lose it (go to 3:15).
Thanks to NHLVideo

Just two months after returning to the Orange and Black, Vandermeer was traded to the Calgary Flames in exchange for a 3rd round pick in the 2009 draft, with which the Flyers picked Simon Bertilsson. After 21 regular season games with the Flames, Vandermeer experienced the NHL playoffs for the first time since 2002-2003 with the Flyers. He'd go pointless as the Flames lost in seven games to the higher-seeded San Jose Sharks in the Western Conference Quarterfinals. 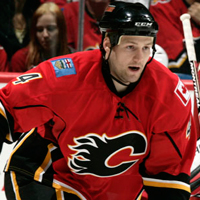 Looking for more stability after a season that saw him traded twice, Vandermeer signed a three-year contract with the Flames in the 2008 offseason. In early November of 2008, Vandermeer broke his left ankle and missed 25 games. Playing in 45 games for Calgary during the regular season, Vandermeer had a goal and six assists. Enjoying a taste of the postseason for a second straight season, Vandermeer's journey for a Stanley Cup ended with the same disappointment. Facing his former team, Vandermeer and his Flames teammates exited the playoffs in the Quarterfinals again, losing to Chicago in six games. 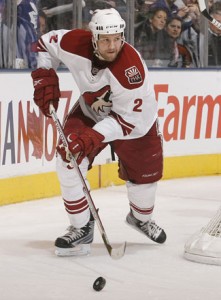 Adding on to the pain of another early loss in the playoffs, Vandermeer was dealt yet again. This time he was shipped out to the Phoenix Coyotes in exchange for the gritty Brandon Prust. Playing in 65 games for Phoenix, Vandermeer had four goals and eight assists while avoiding ankle issues. The Coyotes witnessed Vandermeer's most recent game-winning goal as he had the second goal in a Phoenix 4-1 win against Columbus on October 28th (go to 1:47).
Thanks to NHLVideo

Traded for the second time in back-to-back offseasons, Vandermeer left Phoenix for Edmonton in exchange for Patrick O' Sullivan. Playing in 62 games for a second straight season, Vandermeer missed 15 games due to ankle injuries. He'd have two goals and 12 assists. 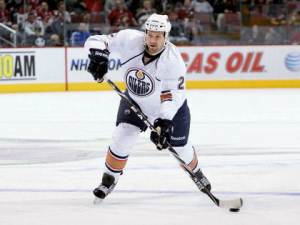 On July 1st Vandermeer signed a one-year contract with the San Jose Sharks. The Sharks are Vandermeer's seventh different NHL team and his fourth different team in four seasons.

Being only 31 years of age, Vandermeer still has a couple of seasons left in him depending on how far his ankles let him play. Not only did Vandermeer serve as a dependable secondary-pair defenseman in Philly, he also brought the Flyers a crucial piece to a deep playoff run and one of the organization's better prospects at the moment.

For Vandermeer, the concern right now isn't whether or not the Sharks are going to make the playoffs, it's whether or not he can help them win the Stanley Cup.