Then and Now: Patrick Sharp 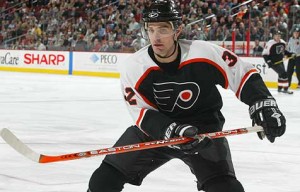 The 2010 Stanley Cup Finals is something a Flyers' fan never wants to think about. Adding on to the agony of coming so close to the Cup and the constant replaying of Patrick Kane's weak goal line shot was the fact multiple former Flyers hurt them in the Finals. Ben Eager had the game-winning goal in Game 2, Kane, who never played for the Flyers but was selected first by the Chicago Blackhawks despite the Flyers having the worst record in the league, had eight points in the series (including three in Game 6), and Patrick Sharp had six points.

Sharp was picked by the Flyers in the third round back in the 2001 NHL Draft going 95th overall, one pick behind Evgeny Artyukhin. Playing one more year at the University of Vermont, Sharp joined the Flyers' organization in 2002 playing the majority of his games with the Phantoms. Sharp went pointless in three games with the Flyers during the 2002-2003 season making his debut on October 10th against the Edmonton Oilers. With the Phantoms, Sharp scored 14 goals and had 19 assists. 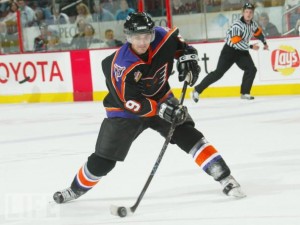 The following season Sharp would see more time in the NHL than the AHL. Playing in 18 less games with the Phantoms, Sharp had 15 goals, one more than the prior season. He'd have five less assists for a total of 29 points. Despite playing in 41 games with the Flyers during the 2003-2004 season, Sharp only averaged 9:56 of ice time per game. Limited to such little time on the ice, Sharp only had five goals and two assists. He'd join the Flyers for the playoffs scoring a goal in the Flyers' Game 5 loss to the Lightning in the Eastern Conference Finals. The goal was Sharp's only point in 12 games during the postseason (go to 1:27).

Staying in Philadelphia during the lockout, Sharp played the entire 2004-2005 season with the Phantoms. Posting his highest point total for any of his seasons in Philadelphia, Sharp had 23 goals and 29 assists in 75 games before the Phantoms headed for the AHL playoffs. Taking part in every game of the Calder Cup run, Sharp had eight goals and 13 assists as the Phantoms won the AHL Championship for the second time in franchise history. 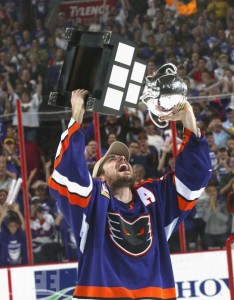 After enjoying his first championship as a pro, Sharp experienced his only trade to date during the next season. In early December, after posting eight points in 22 games, Sharp was shipped to the Chicago Blackhawks along with right winger Eric Meloche in exchange for Matt Ellison and Chicago's 3rd round pick in the 2006 NHL Draft. The Flyers later traded this pick to Montreal for a third and fourth round pick in the 2006 NHL Draft. With these picks the Flyers drafted Jonathan Matsumoto and Jakub Kovar respectively while the Canadiens drafted Ryan White. 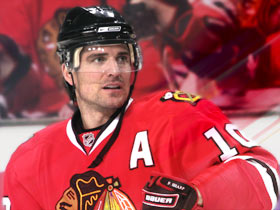 Finishing out the 2005-2006 season with the Hawks, Sharp took part in 50 games scoring nine goals and posting 14 assists as Chicago finished fourteenth in the Western Conference. Following the season, Sharp signed a two-year contract with the Hawks.

Sharp played in eight more games the following season with the Hawks as he scored 20 goals and posted 15 assists. As Sharp's performance improved, the Hawks seemed to fade. Chicago finished 13th in the conference with 71 points, 15 more than the Flyers' 56 points, allowing them to obtain Patrick Kane with the first overall pick in the 2007 NHL Draft.

The 2007-2008 season was more of the same for Sharp and the Blackhawks. Sharp played 80 games for the second straight season and reached the 30-goal plateau for the first time in his career as he had 36. With the addition of 26 assists, Sharp had 62 points for the Blackhawks as they finished just three points out of the playoffs. This was the Hawks' fifth straight season missing the playoffs and their ninth time in ten seasons.

Sharp only played in 61 regular season games during the 2008-2009 season. Missing 16 games due to a sprained left knee in February, Sharp only had 44 points scoring 26 goals and posting 18 assists. Although Sharp had a season not quite up to his expectations, the Hawks ended the season fourth in the Western Conference and earned a trip to the playoffs for the first time since 2002.

The Hawks had an impressive run as they reached the Conference Finals for the first time since 1995. Sharp helped the Hawks by scoring seven goals during their 17 game run tying him with Jonathan Toews for second on the team. Against the Calgary Flames during the Western Conference Quarterfinals Sharp had three goals and three assists in six games including the game-winner in Game 5. As Chicago beat the Vancouver Canucks in six games during the Conference Semifinals, Sharp had two goals, both of which came in Game 2, and an assist. In their final series against the Detroit Red Wings, Sharp had two goals and the game-winner in Game 3.

Gaining experience in the postseason, Sharp and his teammates were poised to make another deep Cup run in the 2010 playoffs. During the regular season, Sharp played every game scoring 25 goals, four of which were game-winners. He'd also set his career high in assists with 41 and points with 66. Sharp's performance helped the Hawks grab the Central Division title as well as second place in the Western Conference standings heading into the 2010 playoffs.

Sharp took part in all 22 of the Blackhawks' postseason games in 2010 as they went on to win the Stanley Cup for the first time since 1961. Sharp and Dustin Byfuglien shared the team lead in goals during the 2010 postseason with 11. In their 6-game series victory against the Nashville Predators in the Western Conference Quarterfinals, Sharp had three goals and four assists including a two-goal game with the game-winner in Game 4 and a three-point game in Game 6. As the Hawks beat the Canucks in the Western Conference Semifinals for the second straight year, Sharp had two goals and five assists highlighted by a four-point game in Game 4. In Chicago's sweep of the San Jose Sharks in the Conference Finals, Sharp had two goals.

Sharp and his teammates were now four wins away from the Stanley Cup. All that stood in front of them was Sharp's former team, the Philadelphia Flyers. Showing how thankful he was that the Flyers helped him reach the NHL, Sharp scored four goals against his former team adding on two assists. Sharp's performance helped Chicago end their 49-year Cup drought. 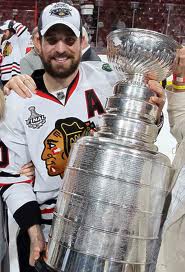 "It means everything," Sharp told the Chicago Sun-Times. "It's unbelievable just to see everybody on the ice, to see our families who supported us all year long. I dreamed about holding (the Stanley Cup) my whole life – what a feeling."

Sharp followed up his Cup-winning experience in 2010 with a great personal season of his own. Setting a career high in points, Sharp had 34 goals and 37 assists this past season for 71 points. His effort earned him a spot at the 2011 NHL All-Star Game. Playing for Team Staal, Sharp had a goal and two assists which allowed him to be the game's MVP. 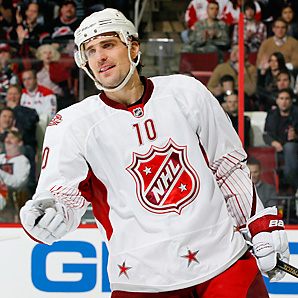 Limping their way into the postseason, the Hawks were handed the eight seed in the Western Conference thanks to a lackluster effort from the Dallas Stars on the final day of the regular season. Not taking advantage of the situation, the Hawks found themselves in an 0-3 hole to the Vancouver Canucks heading into Game 4. Fighting valiantly to force a Game 7, the Hawks came one goal away from pulling off the hardest comeback in all of sports falling to the Canucks in overtime. Sharp had three goals and two assists in the series along with the Hawks' best scoring chance in overtime of Game 7.

Patrick Sharp's career is likely far from over. Turning 30 in December, Sharp still has several more seasons to capture another Stanley Cup in Chicago. His fame and glory may come in Chicago, but Sharp broke into the league with Philadelphia, a fact he is quick to remember.

"They were a first-place team, pushing for a championship, and it was tough to break into that lineup," Sharp told NHL.com. "I was thankful for the Flyers trading me to a great place that gave me a chance to play."