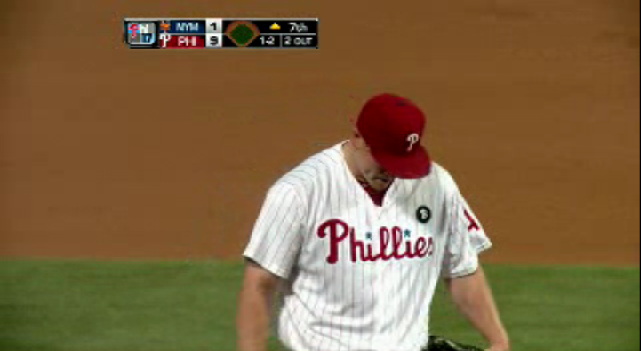 Vance Worley has easily become the fourth ace, now fifth ace with Roy Oswalt back, and is doing so with incredible pitching and an awesome mohawk.

Shane Victorino scored the first run of the game with a solo shot to left field in the third inning, it was his fourteenth of the year.

Next, it was John Mayberry, Jr's turn to go yard with a three-run homer to left, giving the Phils a 4-0 lead in the same inning.

In the fourth inning, Placido Polanco singled to score Vance Worley, and that's when Niese was taken out of the game.

The bottom of the fifth was simply a nightmare for the LOLMets, seeing that the bases were loaded with nobody out to start a rally. First, Wilson Valdez popped up a sacrifice fly, one run scored. Next, Vance Worley singled to score Ben Francisco. Finally, Shane Victorino tripled to score Francisco and Worley. It was Shane's fourteenth triple of the season which is a career high. 9-0 Phillies.

In the top of the seventh, Justin Turner grounded out to score Nick Evans, and the LOLMets had finally gotten on the board for the first time in the series.

Vance Worley pitched a beautiful game, tossing seven innings tonight. His line: Five hits, one earned run, one walk, nine strikeouts. Those nine K were a career high for him.

Michael Stutes came in for the eighth and allowed a two-run home run to Lucas Duda, making it a 9-3 game. He remained in the game for the ninth allowing a lead off triple, followed by a groundout which scored Nick Evans. After giving up a double, Ryan Madson began warming up in the 'pen but was not needed as Michael Stutes retired the side, helping with the 9-4 win.

Phillies will go for the series sweep tomorrow afternoon with Kyle Kendrick on the mound against Mike Pelfrey.