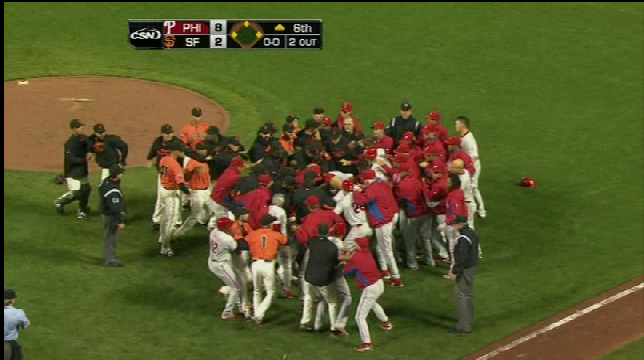 Shane Victorino didn't shy away from questions about his actions on Friday night. He knew this was coming, but what he didn't know was how long or for what he would be sitting out games for.

Also playing major roles in the brawl were Giants' catcher Eli Whiteside, and pitcher Ramon Ramirez. Neither received a suspension. Both were fined, as was Phillies' third baseman Placido Polanco. There were rumors that Giants' manager Bruce Bochy could receive a game, but no warnings had been issued, so a suspension wasn't really warranted. Another player involved heavily was Pablo Sandoval, who clearly had Carlos Ruiz in a headlock during the fracas. Still, with Bochy not likely calling for such an act on purpose, and Sandoval one of the players out of the spotlight, the suspensions should have been limited to those three players. Should have.

Yesterday, I wrote about the brawl and how the suspensions should have been handed out. I had Victorino and Ramirez at three-to-five game suspension, and Whiteside at a five-game minimum. I still stand by that ruling. With the way Major League Baseball cracks down on certain things (Yadier Molina of the Cardinals got five games for an altercation with an umpire) thinking less than three games for any of these players was absurd, no matter how minimal things looked. I gave Victorino and Ramirez the two shortest because they were the two least involved. Sure, Ramirez threw the pitch, and Victorino started toward the mound, but Whiteside led the brawl.

There's a reason Polanco has a fine. He went after Whiteside. I have no issues with Polanco getting fined. But, the pitcher sparks the brawl, not the hitter's response. As far as I'm concerned, Ramirez has to be fined here for even angering Victorino enough to get him to step toward the mound. The fact that Whiteside seemingly encouraged more makes it absurd for him to be off the hook.

Three players were ejected from the game as part of the brawl. All three should also be suspended. Whiteside should have been suspended for being the first player to make an attempt at starting a fight. Whiteside and Polanco were the first two players to come together. Ramirez should get a suspension for intentionally throwing at Victorino, because it was apparent that he was. And Victorino should be suspended for jumping into the pile after things had calmed a bit, and he did push home plate umpire Mike Muchlinski around a bit to get to the pile.

Initial reports showed Victorino was the only player from the Phillies suspended and that Whiteside and Ramirez were also suspended. I didn't get why Victorino would appeal. Now, I see why. Victorino should not be the only player on the hook for actions that night, but he is. One can only hope that MLB officials will come to their sense just a bit when reviewing Victorino's appeal.