Above the Rest: Phils hit historic mark with win over Marlins 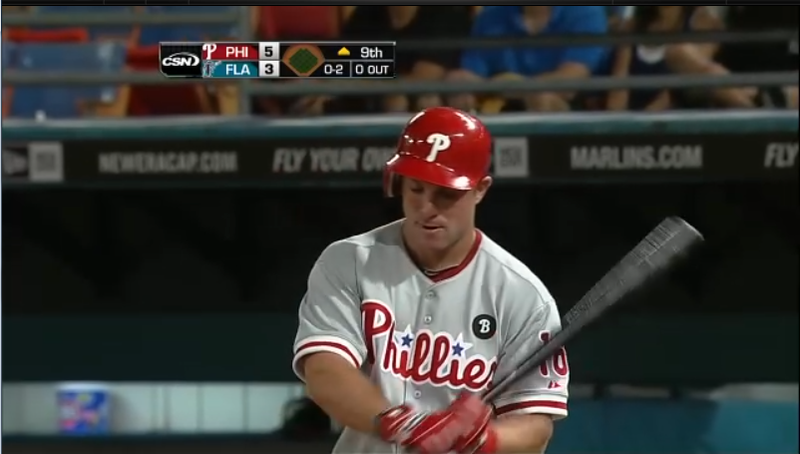 A rookie pitcher against the Phillies' offense isn't a recipe that works toward the Phillies' favor very often. In the beginning, a slugfest start from both sides would simmer down into a slow grind to the finish. The Phillies had the hot hand coming in. The Marlins had seen any playoff hopes dashed a day ago. It isn't too hard to figure out who managed to withstand the grind.

The Phillies got to rookie lefty Brad Hand immediately. Shane Victorino led off the game with a triple off the wall in left. Placido Polanco skied one to center that easily scored Victorino, and gave the Phillies an early lead.

The Marlins had a quick answer. Two straight hits, including a bunt single by Omar Infante, gave the Marlins an early scoring chance. Greg Dobbs followed those two hits by grounding into a double play, but a run would score on the play, tying the game.

The Marlins took the lead in the third, as a leadoff double by Infante would lead to another RBI groundout by Mike Stanton.

But, with a new secret weapon in left field, the Phillies grabbed the lead right back in the fifth. An error allowed Hunter Pence to reach to lead off the inning, and that brought John Mayberry Jr. to the plate. He's hit some impressive home runs since joining the Phillies mid-season, but this one was a shot. Mayberry got a hold of an 0-2 pitch from Hand and blasted a two-run shot, catapulting the Phillies back to the lead.

The Phillies managed to load the bases with no outs in the sixth. Mayberry was at the plate again, and golfed one to deep left-center, but it would only result in a sac fly. The Phillies would strand the runners from there, marking two straight innings the Phillies had the bases loaded with less than two outs, and managed one run or less. In the fifth, the Phillies attempted to score Carlos Ruiz on a shallow fly out by Placido Polanco, but Chooch was out at the plate on the play.

The Marlins got one of those runs right back in the sixth. Jose Lopez hit a two-out home run to cut the lead to one.

A wild pitch by Mike Dunn in the eighth would give the Phillies another run and some breathing room.

Roy Oswalt allowed six hits in the first three innings. But, from there, he really settled in, and finished the night with a solid 6 1/3 innings, allowing three runs on eight hits, walking one and striking out seven.

The bullpen held everything down from there. Mike Stutes finished off the seventh for Oswalt. Antonio Bastardo pitched a perfect eighth. And finally, Ryan Madson helped nail down some history, finishing off his 27th save of the season in the ninth, and giving the Phillies a 5-3 win. The win brings the Phillies' record to 88-46, marking the first time in franchise history that the Phillies have been 42 games above .500.

On a night when the 2011 Phillies etched themselves into team history, the Phillies got a little glimpse into the future. John Mayberry Jr. continues to shine in left field. Unless something goes terribly wrong, the Phillies could be splitting left field duties between Mayberry and Raul Ibanez come the Postseason. That's a good problem to have.

Roy Oswalt also escaped a shaky start to pitch a decent ballgame. He improved his record to 7-8 with the win tonight. He and Vance Worley are the candidates for the fourth playoff starter. Again, that's a good problem for the Phillies to have.

At the plate, only Shane Victorino managed a multi-hit game, going 2-for-4, but with Pence, Mayberry, Ruiz, and Valdez each adding important hits, the Phillies did enough to pick up another win.

With that, it was just another day at the office for the Phillies, so much so, that it doesn't even seem like they made that much history. But, 42 games above .500 is impressive, and will just keep growing if the Phillies keep this up. Coupling this win with a Braves' loss puts the Phillies magic number at 19. Their magic number to clinch a playoff spot is down to 10. All in a day's work.

The Phillies go for their sixth straight win when they face the Marlins tomorrow night. Cole Hamels gets the start against Ricky Nolasco.