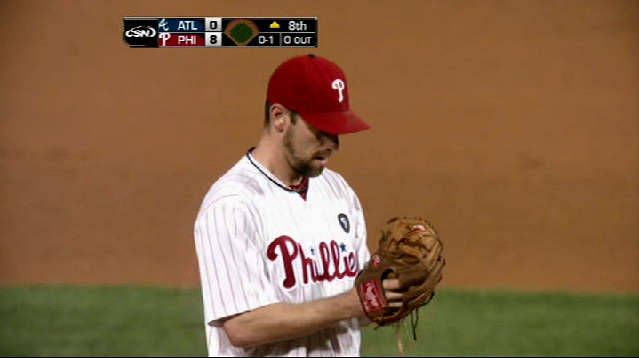 If this is what the postseason will look like– stellar starting pitching and consistent offense– I'm ready. Here's a question for you: When is the pitching not stellar? Especially from this guy, Clifton Phifer Lee? He pitched yet another complete game shutout, allowing only five hits, striking out six, and walking none.

As for the Phillies offense: A+

Hunter Pence batted in the first two runs of the game in the first inning on a single to left field. Another run wouldn't score until the fouth inning when Shane Victorino singled to left field, scoring John Mayberry, Jr., and Carlos Ruiz.

Chase Utley led off the fifth inning with a triple, and with Howard on first following (intentionally walked), Hunter Pence doubled to score Utley. Carlos Ruiz then singled to center field scoring Howard and Pence.

Ryan Howard hit home run number 31 in the seventh inning, giving the Phils a 7-0 lead. Cliff Lee and Shane Victorino both scored on Polanco's single to left field in the eighth inning.

Cliff went out in the ninth inning looking to finish what he started, and he did just that with only 100 pitches. He didn't toss more than 15 pitches in an inning. Cliff picked up his 16th win, and 11th complete game shutout of his career, sixth this season, which is the most by any Phillies pitcher since Steve Carlton in 1982.

Game two of this series will feature Vance Worley against Tim Hudson. Get pumped.