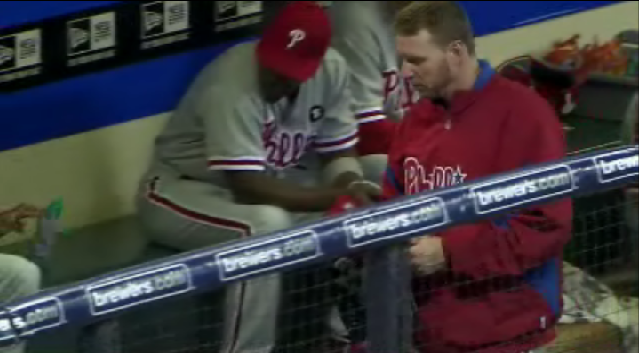 Halladay walks in the dugout after pitching a strong eight innings.

A three-run home run by Ryan Howard, Pete Orr almost got trampled by some racing sausages, and a stellar performance by Roy Halladay. That's about it!

The home run came in the first inning against Shaun Marcum, who, like Ryan Howard, is a product of Missouri State. The homer was a second-decker, and was Howard's 32nd of the season.

I'm sure you're all aware of the daily sausage race in Milwaukee featuring the Chorizo, Polish sausage, Italian Sausage, etc; well, Pete Orr wasn't aware that he was in the path of them, and was nearly trampled. It was hilarious. Video here.

Yuniesky Betancourt popped up a sacrifice fly which scored Casey McGehee in the bottom of the seventh. Doc's shutout was gone. 5-1 Phils.

Halladay's night was done after eight innings/120 pitches. He allowed one earned run on four hits, striking out nine and walking three.

Antonio Bastardo wasn't filthy at all tonight. He allowed a lead off single and walked one before being replaced by Madson in the ninth inning with zero outs. Betancourt singled with one gone, scoring Prince Fielder, and Lucroy hit a sacrifice fly to score McGehee, but Madson retired the side, final score was 5-3.

So, the Phillies take game two of this series, Roy Halladay has won his 17th game, the Phillies have won five in a row, and are now 93-48. Cliff Lee against the Wolf Pack, Randy Wolf, tomorrow night at seven.