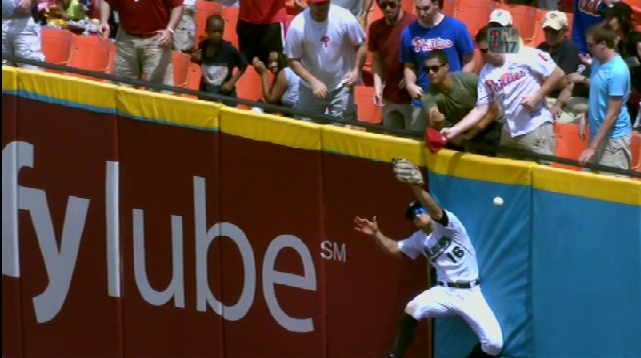 In the 6th inning of the Phillies – Marlins game on Sunday, Hunter Pence hit a long drive to right field in which Marlins outfielder Bryan Petersen jumped to catch the ball.

It appeared that a fan reached over and did interfere with the ball.

However, interference was not called by the umpires, and Hunter Pence rolled into second base with a double, and Ryan Howard, who was on first base, advanced to third base.

Now, instant replay began for one purpose and one purpose only: to review whether or not a ball hit was a home run.

Umpire Joe West invoked instant replay, which would give him the option to turn the double-call into a home run.

Manager Charlie Manuel was ejected for arguing with West, and the Phillies played the rest of the game under protest.