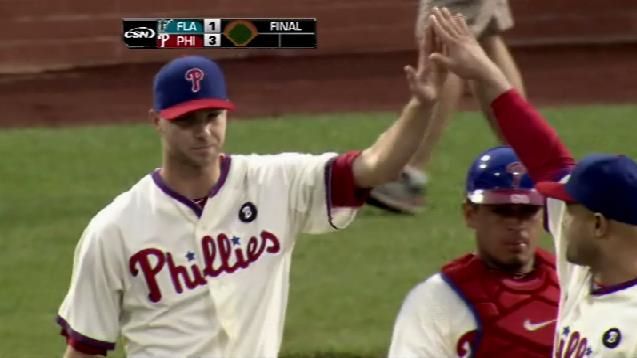 Game one of this double header against the Marlins was started by Kyle Kendrick, who hasn't pitched in 21 days. However, he pitched a solid six innings, being limited to only 75-80 pitches. He took a no-hitter into the  fifth inning before Logan Morrison homered to put the Marlins on the board.

The Phillies already had a 2-0 lead, though. Hunter Pence doubled to score Polanco from second, and Raul Ibanez doubled to score Pence. Raul's double marked his 30th of the year, and now has doubled at least 30 times in the past ten seasons.

In the bottom of the seventh, Chase Utley came in to pinch hit for Michael Stutes, who pitched a scoreless seventh. Chase singled to load the bases for Polanco, who walked to bring in a run. 3-1 Phils.

Bastardo pitched an iffy outing, recording only one out. He allowed a hit and a walk before Brad Lidge came in and basically did the same thing, but struck out one. 16 pitches for Lidge, 14 for sliders.

Ryan Madson closed it out, leaving two runners in scoring position. 31 Saves for Madson. 96 wins altogether. Magic number: 3. Success: Continued. Game two of this double header at 7:35. Lee on the mound against Sanabia.