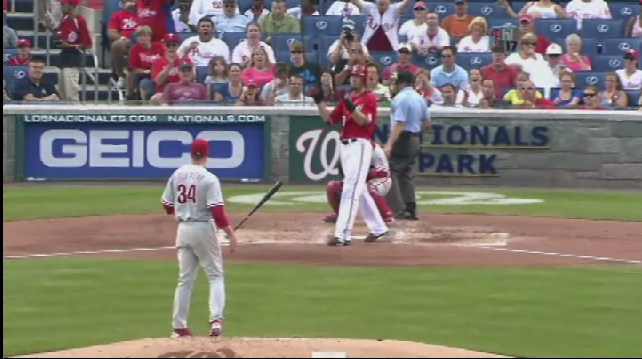 I remember back in 2008 wrapping up the night courses I was teaching at Holy Family University.  Class ended just after 9p.m., and there was one thing I did every time I was there:  I raced to nearby Whitman Tavern to watch the end of the night's baseball games on their many televisions and many games to see some fierce battles towards a postseason birth. (Note: I am not advertising the Whitman Tavern; in fact, it closed soon after these playoffs).

Last season, the Phillies and Braves were within sniffing distance of each other by mid-September, so no one had the real need to take their foot off of the accelerator.   This season is much different, with the Phillies holding a whopping 11-game lead in the NL East.

However, looking around baseball, most playoff races are pretty much settled and there are few opportunities for exiting games to watch beyond the Phillies (because, they will never get old or make me bored).

In the National League West, the San Francisco Giants are now 8.5 games out of first place behind the Arizona Diamondbacks, and the future was made extra bleak with injuries to closer Brian Wilson and important left-handed setup man Jeremy Affeldt, who stabbed himself with a knife separating frozen hamburgers.   As comical as that sounds, he has nerve damage and cannot pitch again this season.

In the National League Central, the Brewers have taken off and now sit 7.0 games ahead of the St. Louis Cardinals.   While not totally unattainable, the Cardinals and Brewers will not face each other the rest of the season.  Currently the Brewers are 1/2 game out of the second seed in the National League Playoffs.  The Cardinals are also close to being eliminated from Wild Card contention by the Braves, who they face this weekend.

The Braves have all but solidified the National League Wild Card.   Currently the Braves sit 84-61, which would be good enough to be at least tied for first place with four other divisions in baseball.  But, the Braves are not, and they sit 11 games behind the Phillies.   The Braves have shown signs of leaking oil, going 4-6 in their last 10 games, but the wild card should be theirs.

The American League East is always an interesting division to watch.  Well, it least used to be before ESPN and Fox Saturdays started airing every single game between the two teams.   The division race is pretty tight; the Yankees hold the lead and the Red Sox are 2.5 games behind and have a 5.5 game lead on the American League Wild Card.   The teams face each other another three times before the season closes.   The Yankees also face the Tampa Bay Rays another seven times.

Speaking of the Rays, they are making a push for the wild card, according to some, making it a late-season storyline.  However, it will not be easy for the Rays.   They face the Red Sox two more times this weekend and three times next weekend, and face the Yankees those seven times as well.   Nothing short of a sweep against Boston will put them back into the race.   It's a nice thought, but the race is pretty much settled.

The American League Central is clearly going to the Detroit Tigers.  Currently, the Tigers hold a 9.5 game lead with 18 to play.   Of course it's always mathematically impossible, but the Tigers would have to go 8-10 with Chicago winning out.

The American League West may be the one lone exception of there being a race, with the Texas Rangers and Los Angeles Angels of Anaheim (I hate typing all that) separated by just 2.5 games in the standings.   The Rangers may have the edge because they spend their next 14 games facing teams .500 or less in the standings and hold that 2.5 game lead.   The Angels have two games against the Yankees and 13 against losing teams before the last series of the season.   The final series of the season for both teams? They face each other.  Could make for some interesting baseball.   The downside of course, is that both teams are West Coast teams, and I'm not likely to stay up until 1 or 2 a.m. to watch.

Phillies fans still have plenty to look for down the stretch: clinching the National League East, clinching home field advantage, Halladay's quest for 20 wins and Lee's quest for dominance as they perhaps battle each other towards a Cy Young, seeing if Antonio Bastardo can regain his dominant form, watching September call-ups (if they ever finish their minor league playoffs) show what they have, and much, much more.