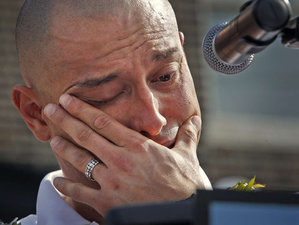 Last May, the Philadelphia Phillies and the Boys and Girls Club of Nicetown announced that a generous donation had been made to the facility by Shane Victorino. It was a donation of $900,000.

The money was donated to renovate the building, which was built in 1906. The Boys and Girls Club was crumbling, and Shane Victorino stepped in with the help of his foundation and rebuilt it. Shane held multiple benefits which supported his foundation, such as the fashion show in 2010 and 2011, and book signings with author Alan Maimon, who wrote Shane's biography.

On September 22, 2011, the Boys and Girls Club of Nicetown, Pennsylvania was re-opened. Standing on Shane Victorino Way, Shane Victorino himself was in attendance to give a speech, and had his family and friends by his side. Shane, in tears, gave the most emotional speech you'll ever see. More emotional than any World Series speech.

"I don't know what's sweeter for me," said Victorino, 30, as his father handed him a tissue. He noted the team's World Series win in 2008, and possibly another in 2011. "But seeing this building – " he said, halted by emotion.

"That's all right, Shane," someone shouted.

" – To think that the kids of this community will benefit from this Boys and Girls Club means so much to me."

"I remember two years before that," he said, choked up. "I called up my dad and said, 'Dad, I think I'm done playing baseball.' But to think, a year later, I would be in the big leagues, a World Series champion – no way."

Kia Gregory from the Philadelphia Inquirer reports that Shane Victorino spoke to the crowd on a makeshift stage, wiping away his many tears.

The speech was shown on CSN Philly's Sports Nite following the end of the Phillies post-game show. I choked up a bit, I had never seen Shane so emotional and filled with joy. The video can be found here.

Shane, we couldn't ask for a more generous, kind-hearted center fielder to play for the best team in all of baseball. Keep playing the game the right way, and never change. You're a great ballplayer, and a great man. 2011 World Series, here we come.