Phillies’ Chase Utley Out at Least Two Days With “Mild Concussion”; Did Not Travel to Milwaukee for Brewers Series 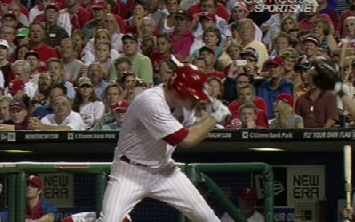 Well, the pitch to the head caused Chase Utley to suffer a "mild concussion" in the words of Phillies General Manager Ruben Amaro Jr.

This ESPN report says that Utley will miss two games, and did not fly to Milwaukee with the rest of the Phillies for this week's series against the Milwaukee Brewers.

Utley literally did not seem to know what hit him when the Eric O'Flaherty pitch hit him square on the helmet.  However, he was removed from the game an inning later when he complained of headaches.

The piece also mentions that Jimmy Rollins could be activated on Thursday, which would help the Phillies up the middle with Utley out.

Now 10.5 games ahead in the NL East ahead of the Braves, the Phillies can afford to allow their players time to heal.   There is no rush.