Phillies in search of record in series with Cardinals 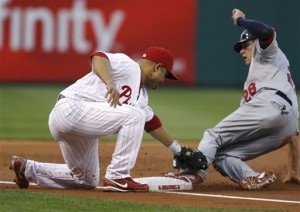 The magic number is two. The Phillies are just three wins away from their first 100-win season in 34 years. And as this homestand goes on, the records are only meant to keep falling. The Phillies could have their fifth straight NL East title by the end of the night, but by the end of the weekend, they could be in a place no Phillies team has been in quite some time.

The Cardinals come in as a hot team, starting to crawl their way back into the wildcard race. Still, the Cardinals will likely be without Matt Holliday, who has been dealing with a hand injury. That doesn’t leave this team shorthanded, as sluggers Albert Pujols and Lance Berkman lead the way. Pujols has seen his numbers decrease slightly this season, and Berkman has gradually cooled from his ridiculous first half. Look for minor players like Ryan Theriot, Yadier Molina, and Jon Jay to get some offense going for the Cards as well.

Here are the pitching matchups for this series.

Worley lost his first start since May, allowing three runs over seven innings in a loss to the Brewers. He has never faced the Cardinals in his career.

Garcia allowed three runs over six innings in a win over the Braves in his last start. He faced the Phillies once this season, allowing one run over eight innings in a 2-1 Cardinals’ win on May 17th. In five career games (three starts) against the Phillies, Garcia is 2-1 with a 1.17 ERA. With back-to-back wins to open September, that snapped a winless streak of six starts.

Oswalt lost his last start to the Astros, allowing five runs over seven innings. He has faced the Cardinals twice this season. On May 17th, he allowed one run over five innings in a 2-1 Phillies’ loss. On June 23rd, he allowed four runs in two innings before leaving with an injury. In 30 games (29 starts) against the Cardinals, Oswalt is 9-9 with a 3.30 ERA.

Hamels allowed five runs over five innings in a loss to the Astros in his last start. Hamels has not faced the Cardinals this season. In eight career starts, Hamels is 2-2 with a 3.00 ERA against the Cardinals.

Much of my basis on the prediction of this series comes from yesterday’s doubleheader. The home crowd is electric, and the Phillies have a motive: win the division and take home field advantage. There were reasons the Phillies should have lost both games of that doubleheader. They won both under tense pressure in the late innings. That shows the Phillies still have some drive, still have focus on the goal, and still want to be the best they can be.

The opener looks good for the Phillies, who immediately have a chance at the division title. With the NL East so close, chances are the Phillies won’t let it wait to be won another day.

The second game favors the Cardinals because Roy Oswalt hasn’t really turned it on since returning from the DL. But, the motivation of Oswalt is there, so things could change.

The third game has a pitching matchup that could go either way, so the Phillies will have to outhit the Cardinals. They have hit Carpenter around before, so the Phillies might hold the edge here.

The finale is easily one the Phillies should win. Roy Halladay has been dominant lately, and has great numbers against the Cardinals. The Phillies have also hit Lohse hard before, so the combination is perfect for a Phillies’ win.

The Phillies host a four-game series against the Washington Nationals to close out their home schedule for 2011 after this series with the Cardinals.