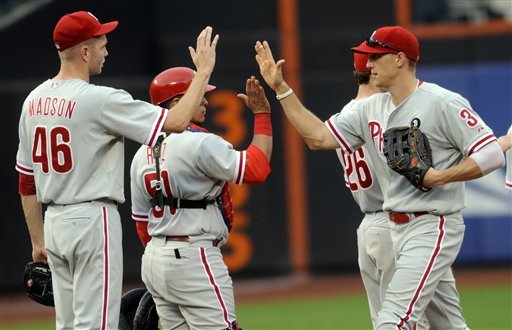 The final series of the 2011 regular season went underway tonight in Atlanta. The Braves are fighting for a spot in the postseason along with the Cardinals in the Wild Card. They would have to fight pretty damn hard to edge this Philadelphia team, though.

The Braves would hop on to an early lead in the second inning; Chipper Jones homered off of starter Cliff Lee, then Alex Gonzalez doubled to score Matt Diaz.

In the top of the fourth, Placido Polanco singled up the middle with the bases loaded to score Hunter Pence. The next inning, Jimmy Rollins shot a solo home run to right field to tie the ballgame.

Following Shane Victorino's 16th triple of the season, Raul Ibanez swung at the first pitch he saw from Cristhian Martinez and singled to right field to score Shane and take a 3-2 lead in the sixth inning.

Cliff Lee's outing was complete after six. He allowed two runs to score on five hits, walking none and striking out six. Joe Savery needed two pitches to get the first out in the seventh, and Michael Stutes finished off the rest of the inning, striking out Alex Gonzalez to end it.

Raul Ibanez came through with an insurance RBI in the top of the eighth, smacking a single up the middle to score Victorino. 4-2 Phillies. Brad Lidge pitched a scoreless inning, getting Chipper Jones to ground into a double play to end the eighth.

Ryan Madson allowed a lead off double in the bottom of the ninth, but would keep that runner at second base as he retired the side, pitching a scoreless inning.

Tomorrow night, Roy Oswalt will take the hill against Derek Lowe who is 1-3 with a 4.13 ERA against the Phils this season.